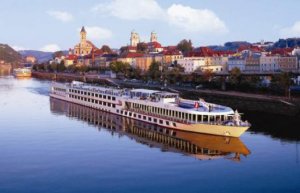 Viking River Cruises has finally caved to the popular balcony trend on river cruise ships. The company unveiled plans this week for four new ships that will feature private balconies and larger staterooms and suites.
The four new ships — the Freya, Idun, Njord and Odin — will be the first of a new class of vessels called Viking Longships. Viking will spend a total of $120 million on the ships, which will sail Europe itineraries in 2012.

“Should we have balconies or not? For a long time I said ‘not,'” said Viking CEO Torstein Hagen.

Hagen said he had been hesitant about balconies because they eat into the square footage of cabins.

Hagen noted that by reconfiguring the layout of the ships (shifting the central corridor and adding two suites at the aft of the ship), Viking was able to add balconies without sacrificing stateroom square footage.

“It’s clear that many people want to go from ocean cruising to river cruising, and people who have been on ocean cruises want balconies,” said Hagen.

The 190-passenger Longships are being designed by maritime architects Yran & Storbraaten and will be 443 feet long, with 95 staterooms each.

Three-quarters of the staterooms on the new ships will feature a balcony, French balcony (doors open to a railing but no patio) or both. The layout is patent pending, according to the company.

There will also be two 445-square-foot Explorer suites at the ship’s aft. These suites will have a separate living room, bedroom, bathroom and private wraparound balcony.

In addition to new cabin configurations, the Longships will have an indoor/outdoor Aquavit Terrace at the front of the ship, a feature Viking was able to add by squaring off the nose of the ship rather than having it come to a point.

Viking has improved upon the energy-efficient hybrid engines it installed in the Legend and Prestige, moving from a two- to a four-generator system to decrease vibrations. There will also be solar panels and an organic herb garden on the sun deck.

As for additional amenities, Hagen said, “I caved in on verandas, I did not cave in on a gym or spa.”

Rather, Viking will test a “concierge program,” partnering with hotels in port cities to offer guests the use of spas and fitness facilities.

The new ships will also have elevators, a feature Hagen said he agreed to “reluctantly.”

The four new ships will cost $30 million each, about $5 million more than the Legend, which launched in 2009, and the Prestige, which launches later this year.

The ships are part of a plan Viking laid out last year to invest $250 million in eight new ships and two refurbishments between 2011 and 2013.

The Freya, Idun, Njord and Odin are scheduled to sail the 10-day Tulips & Windmills (roundtrip from Amsterdam), the eight-day Romantic Danube (from Budapest, Hungary, to Nuremberg, Germany) the 15-day Grand European Tour (from Amsterdam to Budapest) and the eight-day Danube Waltz (from Passau, Germany, to Budapest).

The chancellor has confirmed a delay to this year’s APD rise to next year and said the government will seek to change international law to allow a per plane tax to be brought in.

Giving his annual Budget speech in the House of Commons, George Osborne said the government had “tried every possible option” to bring in a per plane APD, but had to conclude that it was “illegal in international law.”

Confirming the decision not to go ahead with this November’s planned rise in line with inflation Osborne said it had been decided to delay the rise until next year.

The news will be greeted favourably by the travel industry, which has recently formed the A Fair Tax on Flying coalition due to worries over the amount of tax being levied on travel.

Osborne told the House of Commons that the government would also look to change the “rather arbitrary banding system of APD that appears to consider the Caribbean to be further away than part of the US and Hawaii,” and bring private jets into the taxation system.

Norwegian Cruise Line said it would bolster marketing of its Freestyle Cruising offerings in Europe, in recognition of being named Europe’s Leading Cruise Line three years in a row (2008, 2009 and 2010) by the World Travel Awards.
The 4,100-passenger Norwegian Epic this spring makes its debut in Europe, cruising seven-day Western Mediterranean itineraries departing from Barcelona from mid-May through October.
Norwegian Sun will operate from Copenhagen, Denmark, offering nine-day Baltic Capitals voyages that include an overnight stay in St. Petersburg, Russia.

The Norwegian Jade, cruising year-round in Europe, offers seven-day Greek Isles and Adriatic itineraries from Venice through early October and 10- and 11-day Eastern Mediterranean and Holy Land itineraries from mid-October through April 2012 from Rome.

We Travel 2U have been given Expert Status by NCLU – NCL learning arm, which means that we have the knowledge and the resources to  make sure your cruise with NCL goes as smooth as possible