The giraffe wearing an inner tube, an art piece next to the climbing wall on Anthem of the Seas.

SOUTHAMPTON, England — Hanging on walls, suspended from ceilings, rising from pedestals and platforms, braving the weather on upper decks and turning stairwells into galleries, art is the singular attribute that defines and separates the personalities of the Anthem of the Seas and its structural twin, the Quantum of the Seas.

An astounding variety of media, from bricks to light bulbs, are employed onboard the Anthem, unified by the theme “What makes life worth living.”

Purchasing art for a cruise ship, it turns out, is a bit more complicated than selecting an oil painting to hang above your sofa.

There are a variety of technical as well as aesthetic considerations. For example, there’s little chance your apartment will list or roll or that the art in your home will be touched by hundreds of people every day for decades.

Or, if it’s kinetic or illuminated, that it will need circuitry beyond what’s specified for typical consumer appliances. (click the Video link to watch the Richard Fains artwork explained) 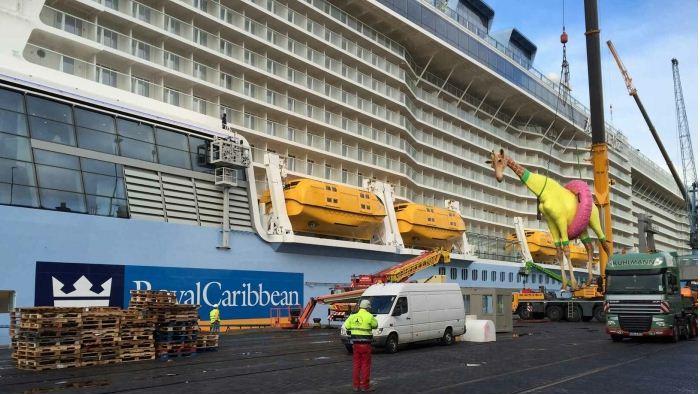 And your backyard fountain probably isn’t programmed to shut down if the ground tilts beyond a certain angle.

Richard Fain, the chairman and CEO of Royal Caribbean Cruises Ltd. (RCCL), said during the Anthem’s pre-inaugural sailing that collectively, the art aboard the company’s ships represents a huge investment. RCCL’s spending on art is in “nine digits,” he said, though he also allowed that art is perhaps the only shipboard procurements that appreciate after purchase.

Most onboard art is acquired with the assistance of a consultancy that specializes in corporate art, though some is commissioned directly from an artist.

Over the years, there have been disappointments, even failures.

In 1987, RCCL commissioned a 9-foot-diameter clock that used tiny glass beads to tinkle, rather than chime, the quarter hour. It was for placement in the Sovereign of the Seas atrium. “I saw it work in the artist’s studio,” Fain said. “It was magnificent.”

And that was the last time he saw it work. The artist spent months tweaking it after it was installed. Engineers were brought in. But tinkling was never again heard.

“The head of [subsidiary] Pullmantur said, ‘I’ll make it work.’” But it was not to be. Today, it keeps time on a Pullmantur ship but still doesn’t function as intended.

When RCCL sells a ship, the art does not go to the buyer; it is removed, and sometimes finds a home aboard another ship.

Fain takes a strong personal interest in the art, and he can give nuanced analyses of various pieces, taking note of color saturation, light, movement, texture, technology, artistic intention and, it turns out, functionality. When he was first shown a catalog detailing the art aboard the Anthem (a catalog that was placed in every stateroom), he paused on the page of a large, illuminated piece and told an executive to check out the installation because “there are four lights out.”

Fain sees a “yin-yang” both in individual pieces and in how the Quantum’s and Anthem’s art varies. While the Quantum’s collection is by no means serious, Fain frequently used  the word “fun” to describe Anthem art. Perhaps the best examples of how the two differ are the choices of statuary on Deck 15, near the rock-climbing walls. The Quantum has a giant magenta bear, holding on to the deck above; not a serious piece, but not as whimsical as the giraffe wearing an inner tube on the Anthem.During a “Common Ground” session during the sailing, in which Fain and other executives answered questions, one agent stated, “I’m not interested in art — I don’t really have time to be interested in art — but this really opened my eyes.”

Another asked Fain, “Why a giraffe in a swimsuit?”

The curator-in-chief didn’t miss a beat in responding about what is possibly the most surreal object on the ship.

“What else would you have there?” he asked.