Norwegian Escape, soon to be the largest ship in the Norwegian Cruise Line’s fleet, departed Meyer Werft in Papenburg, Germany on Friday, September 18, for her approximately 24-hour long conveyance along the Ems River.

Measuring 1,069 feet in length and 136 feet in width, the ship is the first in the line’s Breakaway Plus class, with three additional Breakaways on order at Meyer Werft.

Sailing backwards, Norwegian Escape left Meyer Werft at approximately 2:00 pm local time, and made a narrow passage through the shipyard’s locks, with only 1.2 meters of clearance separating the ship from the “bumpers” that were specially installed along the starboard side of the locks. This maneuver took approximately 2 hours at a maximum speed of 0.2 knots.

After passing through the locks, Norwegian Escape continued along the river, stern first. Before reaching her final destination in Eemshaven, Netherlands at approximately 12:30 pm on Saturday, September 19, Norwegian Escape navigated through additional narrow passages including the Weener Bridge in Weener; Jann-Berghaus Bridge in Leer; and Ems-Barrier in Gandersum.

Following her arrival in Eemshaven, she will head to the North Sea for sea trials later this month.

Norwegian Escape will sail weekly seven-day cruises from her year-round homeport of Miami to the Eastern Caribbean beginning on November 14, 2015.

The 164,600 gross ton ship will be the largest ever to home port year-round in Miami, carrying 4,200 guests to Caribbean destinations including St. Thomas, U.S. Virgin Islands; Tortola, British Virgin Islands and Nassau, Bahamas.

Watch below the Video of the Conveyance, this was filmed by HD1080ide in fantastic HD. 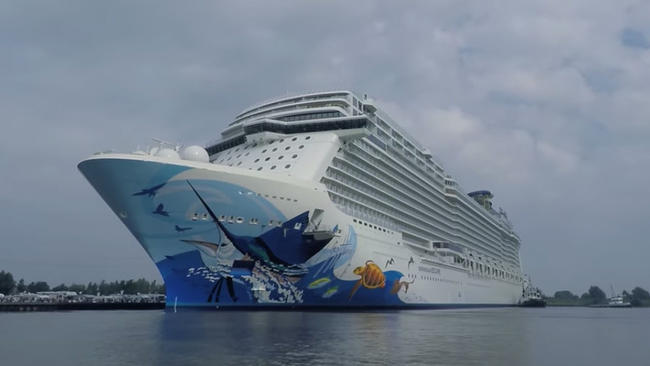 Norwegian latest Mega-ship berthed for 5 days at Eemshaven to take onboard her life boats, provisions and the final materials required to finish her fit out. Friday 25th September 2015 she steamed out of the port Eemshaven on her own power for her sea trials. Below is the the exact location and mapping of the sea trial which ended on Saturday night, after the trials she made for the port of Bremerhaven, she docked at 22:19 hours for a well earned rest.