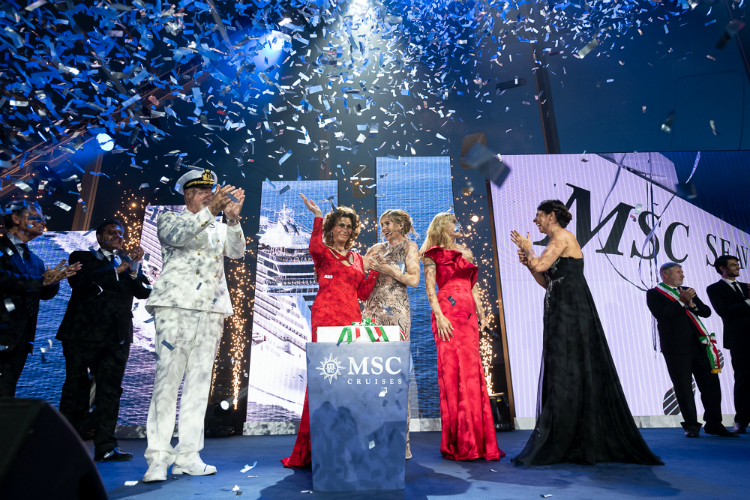 The MSC Seaview was christened on Saturday in Genoa in front of MSC executives, VIPs and key travel partners.

The Seaview will spend the summer in Europe before the 4,140 guest ship moves to Brazil for the winter.

Gianluigi Aponte, MSC Group’s founder and executive chairman as well as the shipowner, attended the ceremony together with the Aponte and Aponte-Vago families.

The christening ceremony was hosted by the star of Italian TV, Swiss-born Michelle Hunziker who welcomed to the stage the “father of Italian blues” Zucchero Fornaciari.

Also taking to the stage was the young talent of belcanto, Matteo Bocelli, son of the world-famous Andrea Bocelli who sang at the christening of MSC Seaside, MSC Seaview’s sister ship in Miami last December.

Also present at the ceremony was Ramon Freixa, the Spanish two Michelin-starred chef who has now extended his partnership with MSC Cruises to develop his first restaurant at sea onboard MSC Seaview. Pan-Asian chef Roy Yamaguchi, attended his second MSC Cruises’ ship christening to celebrate his second restaurant at sea, with his first launching on MSC Seaside. Other stars in attendance included Spanish model and actor Jon Kortajarena, Brazilian presenter and actor Giovanna Ewbank and French television personality Ariane Brodier.