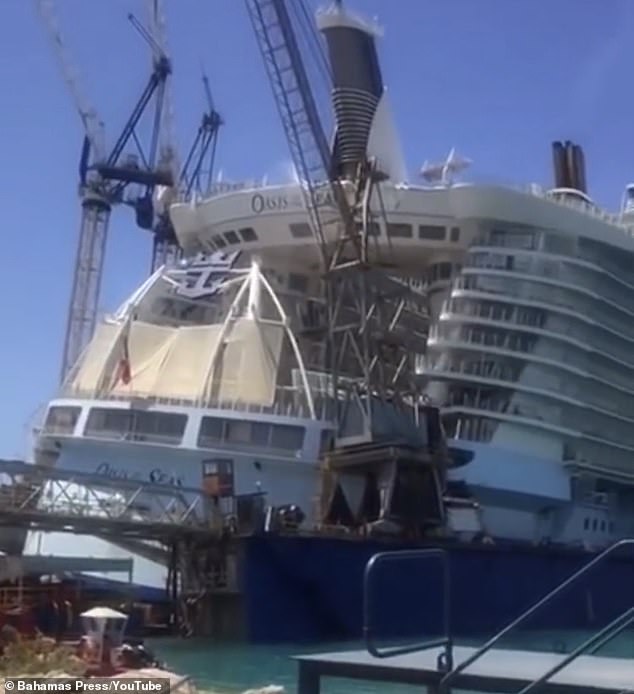 A crane has collapsed onto one of the biggest cruise ships in the world leaving eight people injured.

The Oasis of the Seas was in dock in the Caribbean when the crane crashed into the £1billion vessel causing the huge 228,225-tonne liner to list.

A construction crane came down and smashed into the stern of the boat, which has a capacity of 6,300 people, into the area its AquaTheatre is located.

The four-deck luxury liner which is the fourth largest in the world was in dry dock near Freeport in the Bahamas when the accident happened on Monday at around 1.45pm local time.

A video of the aftermath was posted on YouTube and has been viewed more than 6,000 times.

One dock worker could be heard in the footage saying: ‘I was right there on the dock. I just missed by the grace of God. Big accident.’

The only crew were on board the liner at the time and no guests were present.

A spokesman for Royal Caribbean which owns the liner said: ‘We are responding to a construction site incident at the Great Bahamas Shipyard, where Oasis of the Seas is currently in dry dock.

‘We are accounting for the whereabouts of all site personnel. We are aware of damage to the dock structure and to construction cranes. We are assessing damage to the ship.’

The ship, which had been based at Port Canaveral, Florida, was undergoing routine maintenance on Grand Bahama Island, Royal Caribbean officials said.

Nearly 500 people were struck down with norovirus on board the Oasis of the Seas in January and the huge cruise ship had to change course and head to its home port at Port Canaveral in Florida.

When the ship launched in 2008 she was the largest cruise ship in the world.