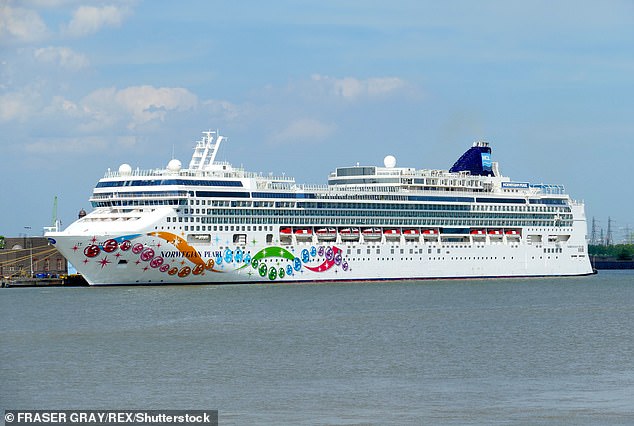 A mechanical issue has left thousands of cruise passengers stuck in Barcelona, while another of its voyages has been cancelled entirely with just days’ notice.

Norwegian Pearl was sailing a 13-day voyage from northern Europe to the Mediterranean when it experienced a technical issue – causing it to travel at a slower speed.

The problem meant the ship, which has 2,300 guests on board, missed a stop in Palma, Majorca, as well as Monte Carlo and is currently stranded in the Spanish city.

Additionally, an upcoming cruise of the Greek Isles and Italy, which was due to depart on Friday (July 5), has been cancelled much to the fury of its passengers.

She said: ‘We were supposed to depart to Livorno at 6am and only miss the second port of call.

‘They changed it around 9am to tell us we may not be able to go to Civitavecchia (Rome), will not be travelling to Livorno, will be receiving a 50 per cent refund and credit for a future cruise. If guests wanted to fully disembark they were allowed to and to make other travel arrangements.

‘Then they announced we will not be sailing to Civitavecchia, our last port of call where most guests have flights booked. We are now kindly asked to disembark the ship by Friday at noon.’

A picture was taken by Cheyenne Lewis, a passenger on the cruise, showing people lining up at guest services to try and re-arrange their travel plans

She continued: ‘A good portion of the guests aren’t from Europe and will be spending a lot in fees to get to another destination. They are reimbursing $300 for airfare costs and have given customers an hour of free WiFi.

‘However, flight tickets will soon run out or be price gouged.

‘I was fortunate enough to have a WiFi package so when the first announcement about disembarking came on, I just bought my family and I flights to Rome and a hotel room.

‘However, from what I’ve heard walking around, some of the flights are not remotely close to the $300 guests will be reimbursed.’

‘Learned on the internet that next cruise has been cancelled. Don’t know how to get to Rome for flights home. Come on NCL.’ 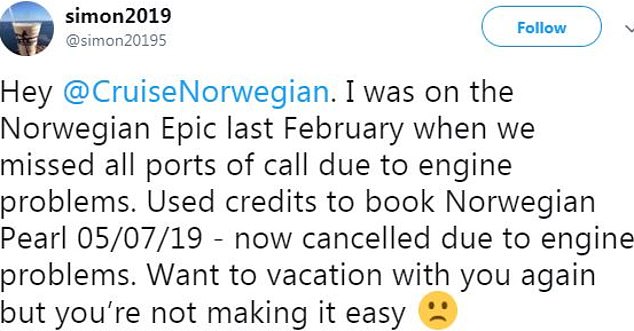 ‘Still stuck on the Norwegian Pearl in Barcelona. They said we’d leave at 6am, pretty sure the engine still won’t start. Can they update us so I can book a flight out of Barcelona?’

A spokesperson for Norwegian Cruise Line said: ‘On July 1, 2019, Norwegian Pearl, which is currently sailing a 13-day repositioning cruise from Northern Europe to the Mediterranean, experienced a mechanical issue which necessitates that she travel at a reduced speed.

‘As such, she did not call to Palma, Majorca, and instead sailed directly to Barcelona where further assessments were made.

‘Due to necessary repairs, Norwegian Pearl’s upcoming Greek Isles and Italy sailing departing on July 5, 2019, will be cancelled.

‘We recognise the disappointment and inconvenience our guests have experienced as a result of this unforeseen situation and we offer our sincere apologies.

‘Our team is working diligently to assist all of our guests, and we thank them for their continued support and loyalty.’