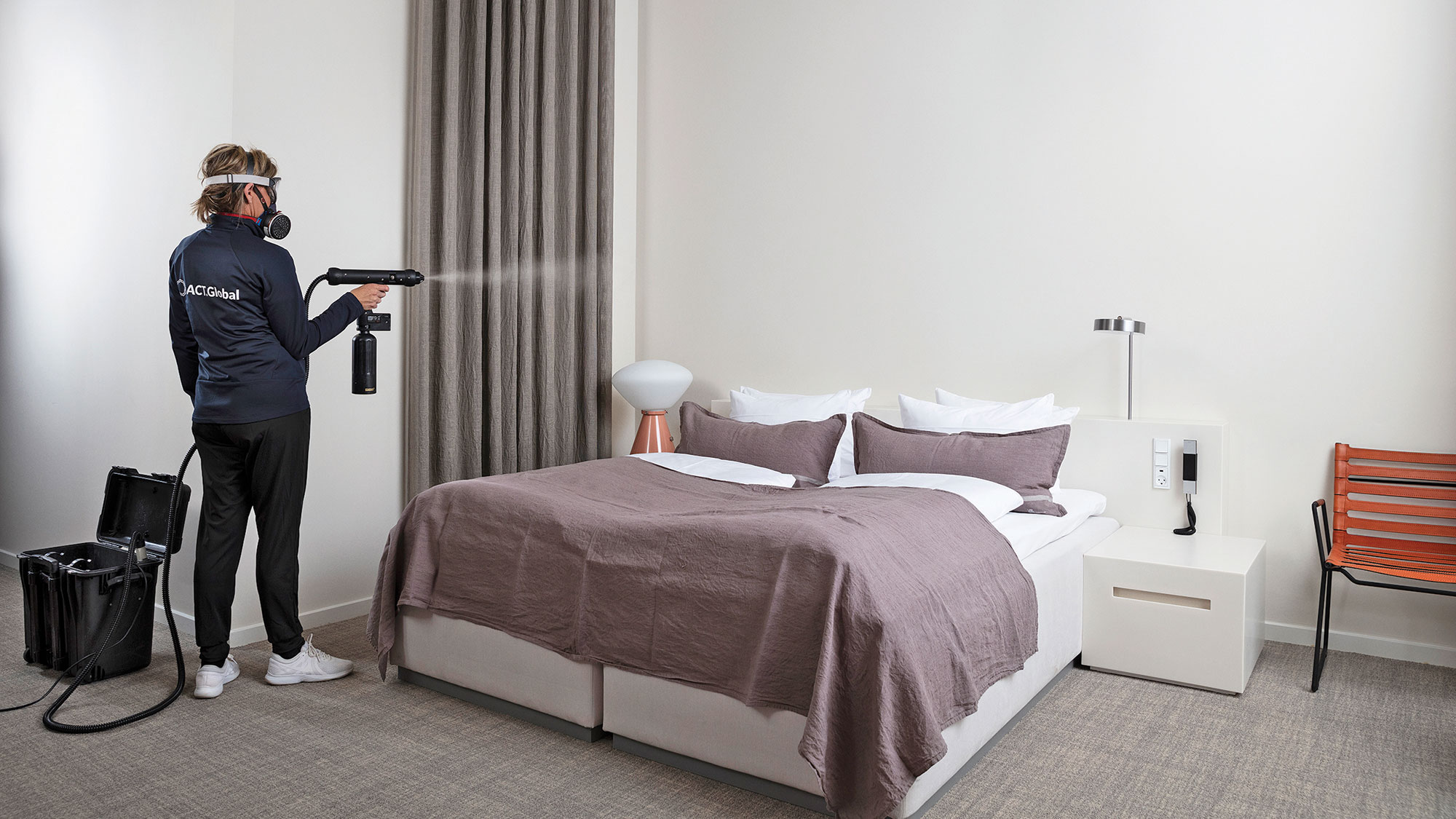 A room is treated with Act. Global’s Act CleanCoat, a coating that is then activated with sunlight or artificial light.

As concern about the Covid-19 coronavirus grows, a promising new antimicrobial surface coating is being marketed to hospitality and transportation companies.

“We had SARS in 2002, MERS-CoV in 2012 and now the coronavirus almost 10 years later,” Tubb said. “These types of things come and go, but they will never fully go away. What we need is a containment approach to allow us the luxury of turning our attention to the discovery of treatment and prevention, while also restoring people’s confidence in a way that will get them to engage with the economy.”

Hotels in a number of countries and the cruise line Lindblad Expeditions are among the early adopters of Denmark-based Act.Global’s product.

The coating’s key ingredient is titanium dioxide, a non-toxic, naturally occurring compound often used in paints, sunscreen and toothpaste, among other products.

The company claims that once exposed to sunlight or artificial light, a photocatalytic reaction activates the coating, producing a continuous surface- and air-purification cycle.

According to Act.Global, the coating has undergone extensive testing and has been approved by several independent laboratories, including Dr Brill and Dr Steinman Institute for Hygiene and Microbiology in Germany, ISI Food Protection in Denmark and Chang Gung University on Taiwan. 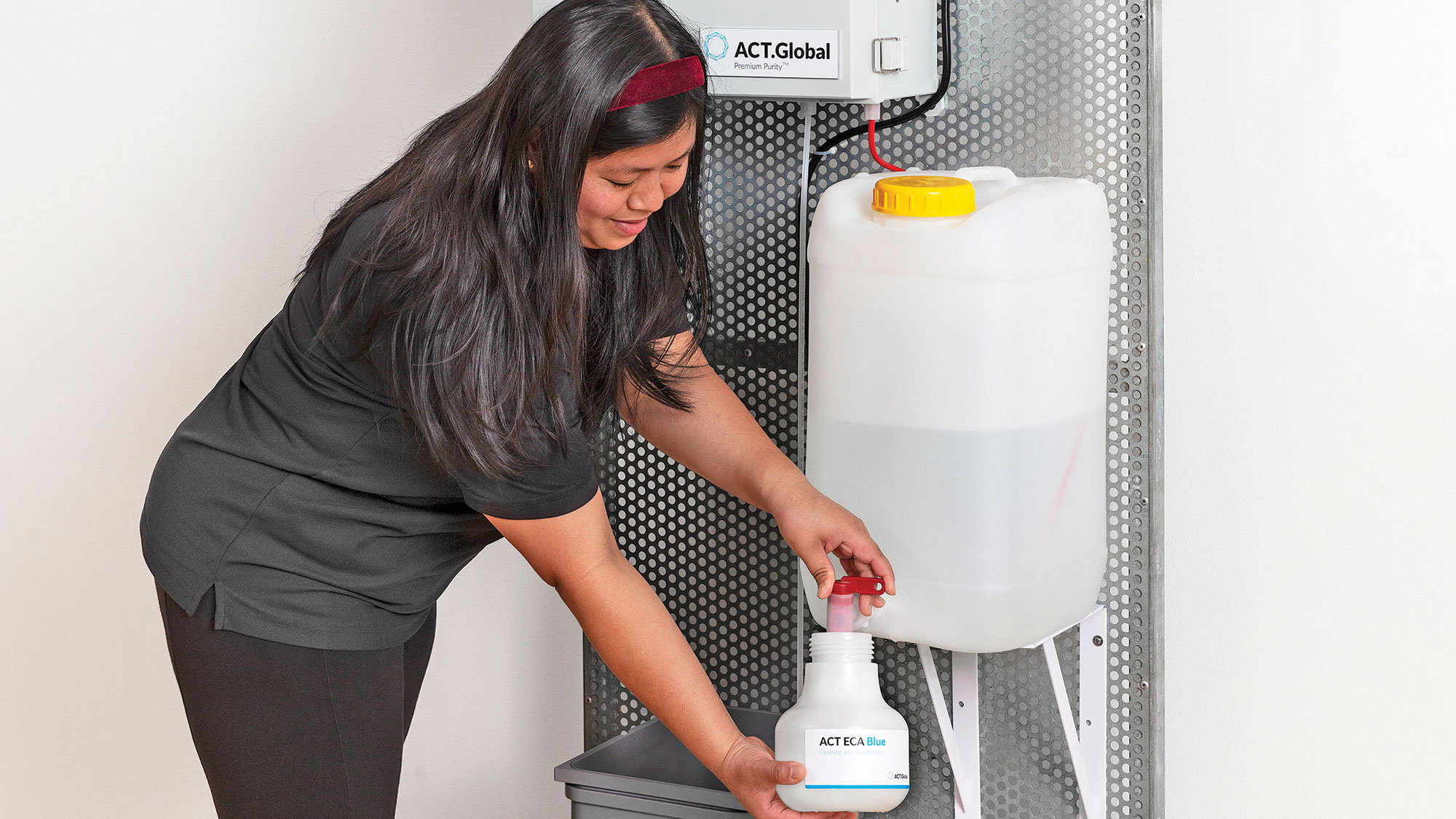 While still relatively new, the company is marketing its Premium Purity system to a variety of commercial and industrial venues, including hotels. To date, the company has launched the system in a dozen hotels throughout Denmark, Germany, India and Thailand.

Christopher Luscher, the company’s chief technology officer, said, “Act. Global is founded on the premise of sustainable disinfection, and what we have seen in the hospitality sector is that we’ve been able to convert the method of cleaning so it’s less like a firefighter coming in and trying to fight a fire and more like the installation of fire-resistant materials.”

In the hotel setting, the company’s CleanCoat can be applied on almost any fixed surface, hard or soft, though Luscher said his rule of thumb is that “if the Mona Lisa is hanging on the wall, it’s best to take it down.” After the coating is applied, it takes two hours to set.

Post-application cleanliness is maintained with the use of an eco-friendly and affordable cleaning agent called Act ECA (for electrochemically activated) water. The water is produced using an Act ECA Generator, which is installed on-site and requires just two ingredients: water and salt.

Hotels aren’t the only settings in which an antimicrobial coating offers a promising solution. In the wake of the Covid-19 crisis, Luscher reported that the company is seeing a surge in demand from airports and restaurants as well as from airlines, railways and cruise ships.

Among the first cruise lines to adopt Premium Purity is Lindblad Expeditions, which deployed the system aboard its National Geographic Explorer ship in mid-2018.

Bruce Tschampel, Lindblad’s vice president for hotel operations, said, “We’re very careful about the environment, and we were looking for options for a green cleaning method that used fewer chemicals and plastic. Also, with cruise lines, we have to be absolutely clean and sanitary because you’re in this small environment, and someone could bring on a cold, and it’s easily passed around.”

The results made a compelling case for the product.

Lindblad has since announced plans to adopt Premium Purity across its entire fleet, coating all of its eight ships, including all public areas and guest and crew cabins. The process is set to be completed by early March. Lindblad’s newest ship, the Endurance, will also be using the system when it debuts next month.

“There is a choreography that has to be managed, whether you’re a hotel or a ship,” Tschampel said. “How do you get all these areas coated, and when is the right time to do it? But so far, we’re extremely pleased, and there are so many benefits. The results have been even better than we expected.”