Symphony of the Seas

The giant is almost ready.

New photos from the shipyard building Royal Caribbean’s Symphony of the Seas — the largest cruise ship ever — show the vessel rapidly approaching the finishing stages of construction.

As seen in the carousel above, the new images of the 230,000-ton ship show an exterior now gleaming with a finishing coat of paint and work well under way on outdoor decks including the Boardwalk amusement zone. Boardwalk will be home to a classic carousel, diner, rock climbing walls, the base of a nine-deck-high slide and more.

Another highlight of the Boardwalk area, an “aqua theater” that will boast daring high-diving and aerial performances, also can be seen nearing completion in the photos.

Royal Caribbean revealed earlier this month that Symphony would be ready weeks ahead of schedule. Now debuting in March instead of April, the vessel has been under construction for more than two years at the giant STX France shipbuilding facility in St. Nazaire, France.

Symphony was floated out from a dry dock at STX France in June, a construction milestone that marked the end of basic exterior work. It is now undergoing months of finishing work to its interior.

Symphony will be more than 3,000 tons bigger than the current size leader in the cruise world, Royal Caribbean’s 226,963-ton Harmony of the Seas. Like Harmony, Symphony will be part of Royal Caribbean’s record-breaking Oasis Class of ships, though it won’t be an exact copy of its sisters. Royal Caribbean has unveiled several new features for the vessel including a first-of-its-kind, two-deck-high family suite with a slide between floors.

Symphony is scheduled to sail to the Caribbean out of Miami starting in November 2018. It’ll move to the city after spending its first few months operating voyages in the Mediterranean.

Escape from the everyday has always been a prime goal of vacationing. Travelers on a cruise not only want to travel to other parts of the world, but they also want to travel away from ordinary living — and many will try things they wouldn’t at home.

Nobody knows that better than Royal Caribbean International. The company’s most recent ship, the 5,479-passenger Harmony of the Seas, offers travelers a safe intersection between idealized reality and wild fantasy.

Nothing could be more centered in an iconic form of reality than the awnings and sidewalk tables of dining venue Sorrento’s pizzeria or the trees and benches of the vessel’s Central Park. But guests will also find fantastical elements onboard, such as a 5-ton metallic human head sculpture by Czech artist David Cerny; a greatly expanded Wonderland restaurant; robotic bartenders; bracelets that open doors; and the “stowaway piano player,” which could appear on the ship’s elevators, by the buffet and in other unexpected places. In kid-centric waterpark Splashaway Bay, sea creature double as water cannons, and in Aqua Theater, 3-D images, optical illusions and more transform divers, acrobats and high-flying performers. 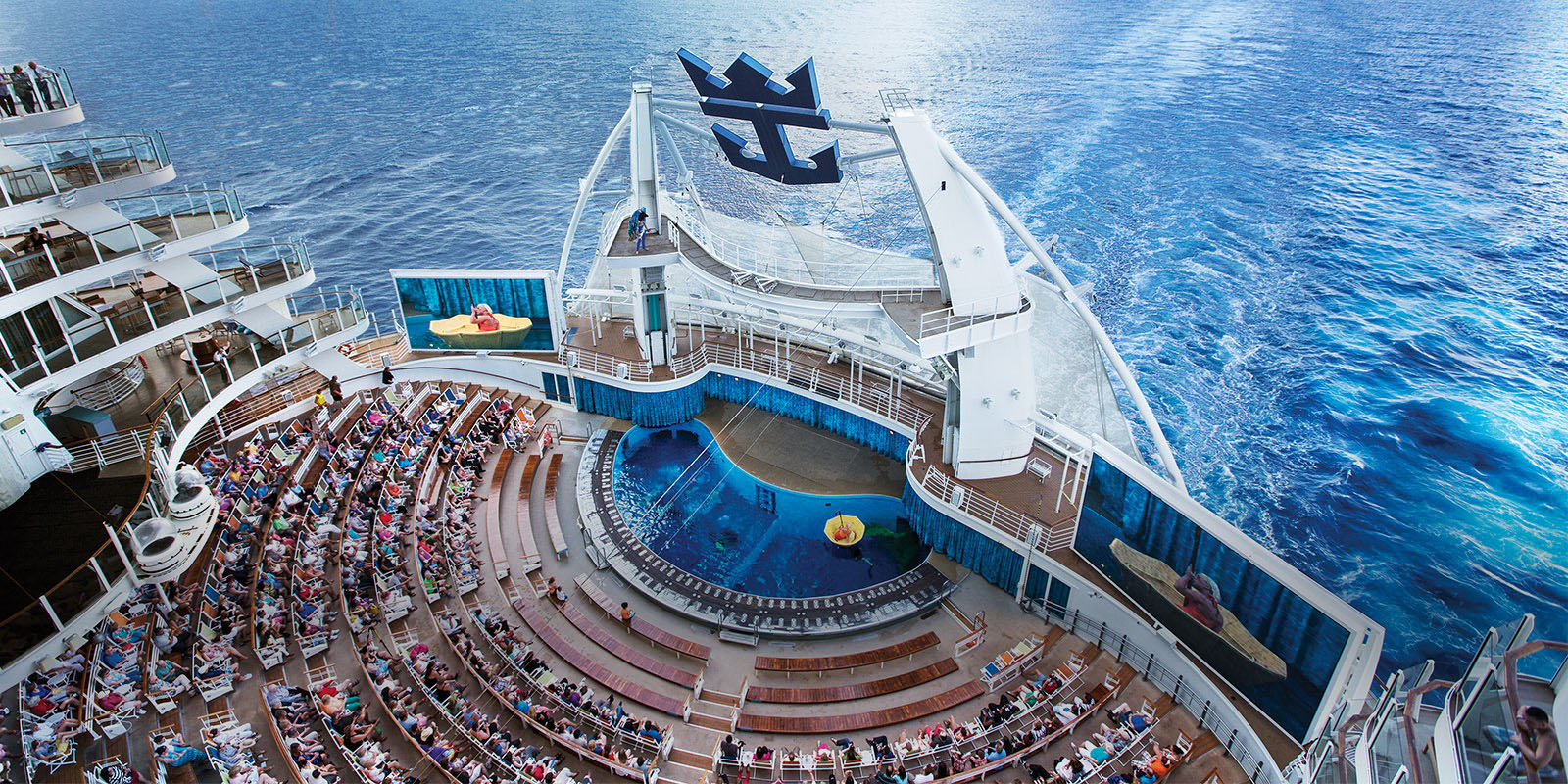 Guests can feel like the main character of author Lewis Carroll’s “Alice’s Adventures in Wonderland” when they dine in Wonderland restaurant, which has been expanded to two decks and offers “maddeningly delicious” menu items and magical, elegant decor. Mysterious elixirs whisper “Drink me,” dishes arrive shrouded in smoke, and the magic extends to the flavors of the unusual menu.

Out on deck, the familiar fantasy of the carousel is paired with the much more unusual ride of the ship’s new slides, which have been transformed from slippery speed runs to full sensory experiences. The most dramatic slide, Ultimate Abyss, has a drop of 150 feet and features twin slides made of stainless steel tubes about 2.5 feet in diameter. Adventurous guests step from a glass platform onto special mats and launch themselves at 9 mph through the toothy jaws of a fish along a twisting route 10 decks down, accompanied by audio effects.

With all of its special features, which are brand new and brought over from earlier Quantum- and Oasis-class ships, Harmony of the Seas, the world’s largest cruise ship and 25th in the Royal fleet, comes in at a cost of more than $1billion.

Arriving in Barcelona in early June, the vessel will launch initial inaugural sailings of 34 seven-night Western Mediterranean cruises. In November, it will arrive in the U.S., settling in its homeport of Port Everglades, in Fort Lauderdale, Fla., to sail seven-night Eastern and Western Caribbean cruises.

Allure of the Seas in dry dock

Royal Caribbean’s Allure of the Seas, the world’s largest cruise ship, received new restaurants, suites and public spaces in its first major drydock since its debut in 2010.

Royal Caribbean said it has added 10 new suites to Allure, with views of the aft Aqua Theater and Boardwalk neighborhood. They include two new Royal suites, six Grand suites and two Royal Family suites. Guests will have access to a new Suite Lounge and a new sun deck area both exclusive to suite passengers.

The ship will sail in Europe from Barcelona through November, when it will return to Fort Lauderdale.