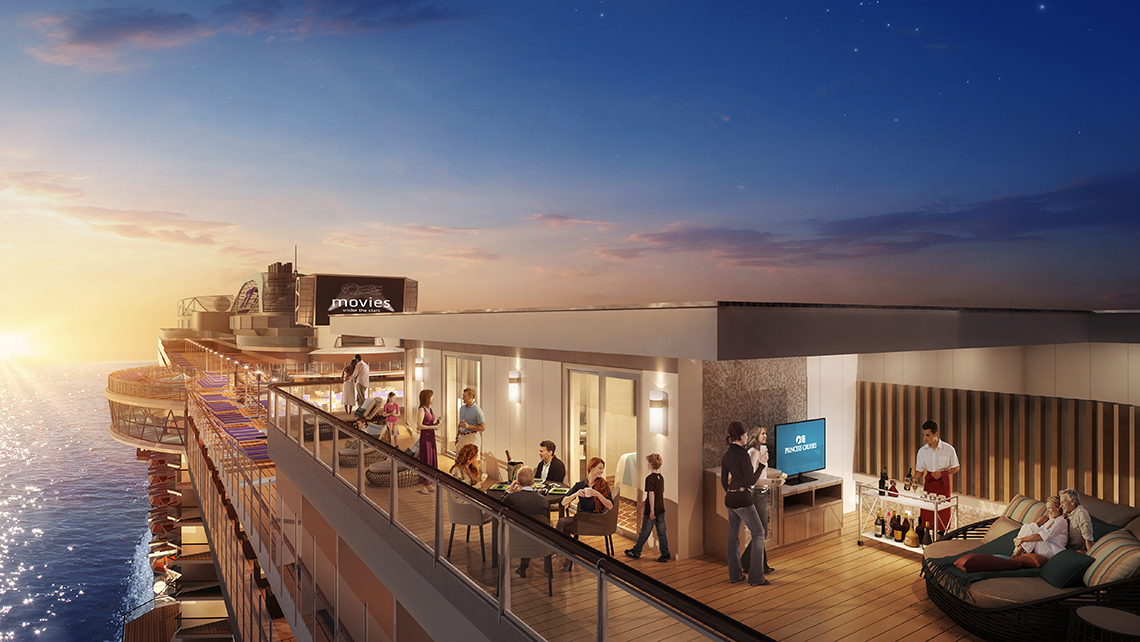 On the Sky Princess, the Sky Suites will be centrally located on the top decks and feature the largest private balconies ever offered by Princess Cruises.

Princess Cruises unveiled renderings of areas of the Sky Princess, a ship due in October 2019, including suites with the largest balconies ever offered on Princess.

The 700 square foot verandas will give suite guests a private vantage of the ship’s Movie Under the Stars screen. Two of the suites will have 270-degree panoramic views and have a sleeping capacity for five guests.

The 143,000-gross-ton ship will be the fourth in the line’s Royal class, accommodating 3,560 guests. It will have double the number of private cabanas as on its sister ships.

The ship’s Vista Lounge will get a new look complete with a full bar offering, an evolution of the popular lounge on other Princess ships. Guests can take advantage of a new cafe in the Princess Live venue, serving barista-made coffee, tea and quick bites.

Note; Handrails around the ship and on balconies are a minimum of 4 inch’s (100mm) higher than land based/home stairs. Housing standards state; Handrail height, measured above the stair tread nosing, shall be uniform, not less than 34 inches and not more than 38 inches and the cruise states; The Cruise Vessel Safety and Security Act (CVSSA) of 2010 proposed measures aimed at improving cruise ship safety, such as increasing the guardrail height to 54 inches.

The Coast Guard said it expects cruise lines to rely on video monitors rather than automatic detection and alarm systems to meet a safety requirement regarding passengers falling or jumping off ships.

The agency’s newly proposed rule, implementing a 2010 safety law, would allow cruise lines to use recording technology to address the problem of passengers going overboard while at sea.

So-called man overboard (MOB) technology has been tested by various cruise lines, and its backers say it could save lives and reduce search-and-rescue costs. But the Coast Guard noted that CLIA believes the detection systems “are not yet reliable under marine conditions.”

“The technology to reliably detect persons as they are in the process of going overboard does not presently exist,” CLIA asserted.

The Coast Guard went on to say that “we expect that owners and operators will select the image-capture option provided by Congress until such time that fall-detection technology is believed to be sufficiently reliable.”

The issue of how to curb the number of overboard incidents has been raised by groups such as the International Cruise Victims, which was formed in 2006, in part to raise awareness of cruise ship disappearances. According to the Coast Guard, about 2.2 deaths or missing persons a year result from overboard incidents on cruise ships around the world. A database kept by University of Newfoundland professor Ross Klein, which tracks ferries as well as cruise ships globally, includes 243 overboard reports since 2000.

One of the latest occurred Jan. 8 off Cozumel, Mexico, when a 22-year-old male passenger fell or jumped from Royal Caribbean’s Oasis of the Seas, only to be rescued several hours later by the passing Disney Cruise Line ship Disney Magic.

Marine surveillance companies have been working for a decade to perfect an alarm system that would sound when it detects a person tumbling off a ship.

The system uses thermal cameras mounted on the hull and other parts of a ship to detect body heat. The images are fed through computers that use algorithms to quickly assess what the camera is seeing.

The alarm can be sounded on the bridge or at other centralized security stations.

Supplier companies say cruise lines are actively interested in the idea, but CLIA listed nearly a dozen obstacles to reliability.

Some have to do with the special factors of a marine environment, such as salt corrosion or encrustation on camera lenses.  Surface glare from the water, the pitch and yaw of a ship, extreme weather, vessel vibration and a continually changing horizon are all listed as constraints.

“CLIA recognizes that many systems exist and are suitable in a static land-based environment,” the white paper stated. “However, the cruise industry has evaluated and demonstrated numerous MOB detection systems, and most have been determined to be unworthy of further consideration.”

Companies that have been testing systems on cruise ships as far back as 2006 include Seafaring Security Services of Virginia Beach, Va., and PureTech Systems of Phoenix.

Larry Bowe, president of PureTech, said he believes his company’s system can meet the reliability requirements of the cruise lines.

“Given our extensive testing to date, we do feel the technology is readily available and can be deployed in the near future,” he said.

Bowe said the problem of an unstable horizon can be addressed with the proper computer analytics and that maintenance in a marine environment likewise is manageable.

“Cameras have been on ships for a long time, so I have to believe those issues can be addressed,” he said.

The proposed Coast Guard rule gives cruise lines the choice of either using detection systems or capturing images that can later be used in a search-and-rescue operation, or a combination of both.

Bowe said it would be vastly more effective to have the capability of instant alert.

“If you have cameras onboard and you’re capturing imagery, why not add detection?” he asked. “These events can take as little as half a second. What’s the likelihood that someone is going to be watching that imagery in a half a second time during a seven-day cruise to happen to catch them?”

Under the Coast Guard proposal, the recordings of captured images would have to be time-stamped and archived for 14 days. They would be used to narrow a search for any missing persons.

Some of the same companies that make MOB systems also provide security cameras for ships. The new Coast Guard proposals also set rules for such surveillance, as required by the 2010 Cruise Vessel Safety and Security Act. The agency has been writing rules to implement provisions of the act.

The surveillance rule would require coverage of any area on a ship where passengers and crew both have access. CLIA had warned a rule that was too detailed and proscriptive wouldn’t fit every ship.

One passenger group had asked for active monitoring of cameras as well as recording, but the Coast Guard did not adopt that approach.

The surveillance requirement won’t change much for most cruise lines, which  already extensively monitor their ships. According to one surveillance supplier, some ships carry as many as 1,400 security cameras.

The Coast Guard is proposing that video from the cameras be kept for 14 days, rather than for the 90 days advocated by passenger groups.

Other provisions of the proposed rule, which was published in the Federal Register Jan. 16, would require a printed guide to security in every stateroom and establish more procedures for training ship personnel on crime investigation practices. It would also codify a 42-inch height standard for exterior guard rails and bulwarks.

The Coast Guard said its rules would apply to 147 ships that either board or disembark passengers in U.S. territory but not to ships that merely visit for a port call.

It estimated the 10-year cost of the rules to the cruise lines and the U.S. government at nearly $80 million, including about $30 million for image-capturing systems.

Once the rules are finalized, it would complete the Coast Guard’s implementation of the cruise safety act, most of which is already in force.

Bowe said the MOB technology has continued to advance since the Coast Guard first sought comment in 2011 and that cameras, processing power and algorithms have substantially improved.

It said the policy takes effect Nov. 1. Passengers caught smoking will be fined $250.

In addition, smoking in the casino will be limited to active players.

Norwegian will continue to allow smoking on the starboard side of the Waterfront areas on Norwegian Breakaway and Getaway, except near outdoor dining venues.

Smoking will be allowed in public areas that are designated by management based on an individual ship’s arrangement and characteristics, Norwegian’s smoking policy says.

Electronic cigarettes cannot be used in public areas where there is a no-smoking policy because they look so realistic that guests’ perception is that the no-smoking rule isn’t being enforced, Norwegian said.