The Carnival Radiance and Breeze will join the Vista and Dream sailing from Galveston year-round in May 2021, Carnival Cruise Line announced today.

“We’ve been undergoing steady growth in Galveston since we started sailing there in 2000 with one ship,” said Fred Stein senior director of revenue planning and fleet development, Carnival Cruise Line.

The line went to three ships out of Galveston in 2015, with the Vista taking the place of the Breeze recently and adding more berths to the market.

“The next level of growth is adding a fourth ship,” Stein continued.

The four ships will mean Carnival is posting a 25 per cent increase in berths out of Galveston, according to Cruise Industry News data, with over 13,000 berths based in the Texas port in 2021.

Demand comes via 37 million people within a 500-mile drive, according to Stein, and many who fly in from the West Coast to Houston.

The Radiance, which will be converted from the Carnival Victory after a $200 million drydock next year, is moving to Galveston from Port Canaveral, while the Breeze comes over from Port Everglades for her Texas return.

The Freedom will be redeployed elsewhere, with an announcement expected soon.

All told, Carnival could carry nearly one million guests from Galveston on 235 itineraries in 2021, ranging from five to 14 days.

Stein said the port’s infrastructure can handle the four ships, and parking capacity was more than sufficient.

The Radiance will concentrate on mainly five-day cruises, but three new nine-day options are available that depart on Fridays. Stein said these voyages were ideal as they offered a nine-day vacation, but for the most guest, only a week off work.

“This is the most differentiated content we have been able to offer from Galveston,” Stein told Cruise Industry News.

“Those offer a lot of differentiated port content you wouldn’t get on a short cruise,” Stein said.

The Carnival Breeze will move into the short cruise rotation, sailing year-round four- and five-day itineraries.

“The Breeze has been in Galveston for quite a while,” Stein said. “She is very popular in Texas and will take on the four- and five-day cruises that the Dream is doing.”

Four-day “weekend” cruises leave on Thursdays and call in Cozumel while five-day cruises depart on Mondays and Saturdays with calls at Cozumel and either Progreso or Costa Maya.

The Dream will move to a new six- and eight-day cruise schedule in May 2021 while the Vista will sail week-long cruises on two separate Western Caribbean itineraries.

Carnival plans to carry its 8 millionth guest from Galveston in early 2021.

Carnival started year-round cruising out of Galveston in 2000 with the Carnival Celebration, which was based in the port and offered four- and five-day Western Caribbean sailings at the time.

At the time, the Miami-based brand was the first major cruise line to base a ship year-round out of Galveston. Carnival made a five-year deal in 2000 and in return, the port invested in renovating its passenger terminal and building a parking facility for 1,100 cars.

It’s been all growth then, with the Jubilee joining the Celebration in 2002.

The ships got bigger over time, and two ships became three in 2015, with 2021 set to see four ships sailing year-round for Carnival from Galveston.

The cruise industry could be looking at a monumental impact to their operations following Hurricane Dorian if the Grand Bahama Shipyard’s capacity is taken offline or further limited following an April incident.

The go-to-yard for drydocks and refurbishments in the cruise industry is partly owned by both Carnival Corporation and Royal Caribbean Cruises.

It is ideally located in the Bahamas, meaning little out-of-service transit time on the way to or from various deployment regions, including the Caribbean in the winter.

The yard is regularly used by cruise vessels from almost all cruise lines for mandatory class drydocking and refurbishment work.

There are few alternatives for big vessels in the region. Shipyards in Newport News, Virginia, and Mobile, Alabama, both have facilities that can handle larger vessels but are generally used for naval purposes and are known to be well booked ahead of time.

Deytens, located in South Carolina, has also played host to the expedition and luxury ships and mid-sized vessels over the years.

Costs at U.S.-based facilities are also higher, and there are challenges in bringing in skilled labour and large amounts of the hotel and marine supplies from foreign countries that are needed for large scale refurbishments, which often see spending of up to $3 million per day in supplies and labour.

With reported widespread damage in Freeport, operations to the yard could be impacted. Housing both permanent and temporary workers could prove challenging unless accommodation vessels are brought in.

Another expensive option could be the Boka Vanguard, a semi-submersible heavy transport vessel operated by Netherlands-based Boskalis, which helped provide a platform for emergency repairs to the Carnival Vista earlier this year.

In Curacao, Damen Shipyards offers a drydock option and has plenty of cruise experience.

Cruise lines could also choose to wet-dock their vessels at industrial piers just about anywhere. The upside being the vessel would be empty and available for hotel refit. Crane access could be limited making logistics of getting supplies off and on the ship challenging.

However, classification societies require ships to come out of the water at regular intervals for inspection.

The most likely option, however, is the regular drydock facilities in Europe. The question is whether they have available space when needed, and the impact of moving ships that were scheduled to drydock in the Bahamas to Europe, mixing up some itineraries and deployment.

Cancelling a scheduled drydocking for the third or fourth quarter of 2019 or early 2020 and replacing it with a normal sailing would also pose challenges with a short booking window. 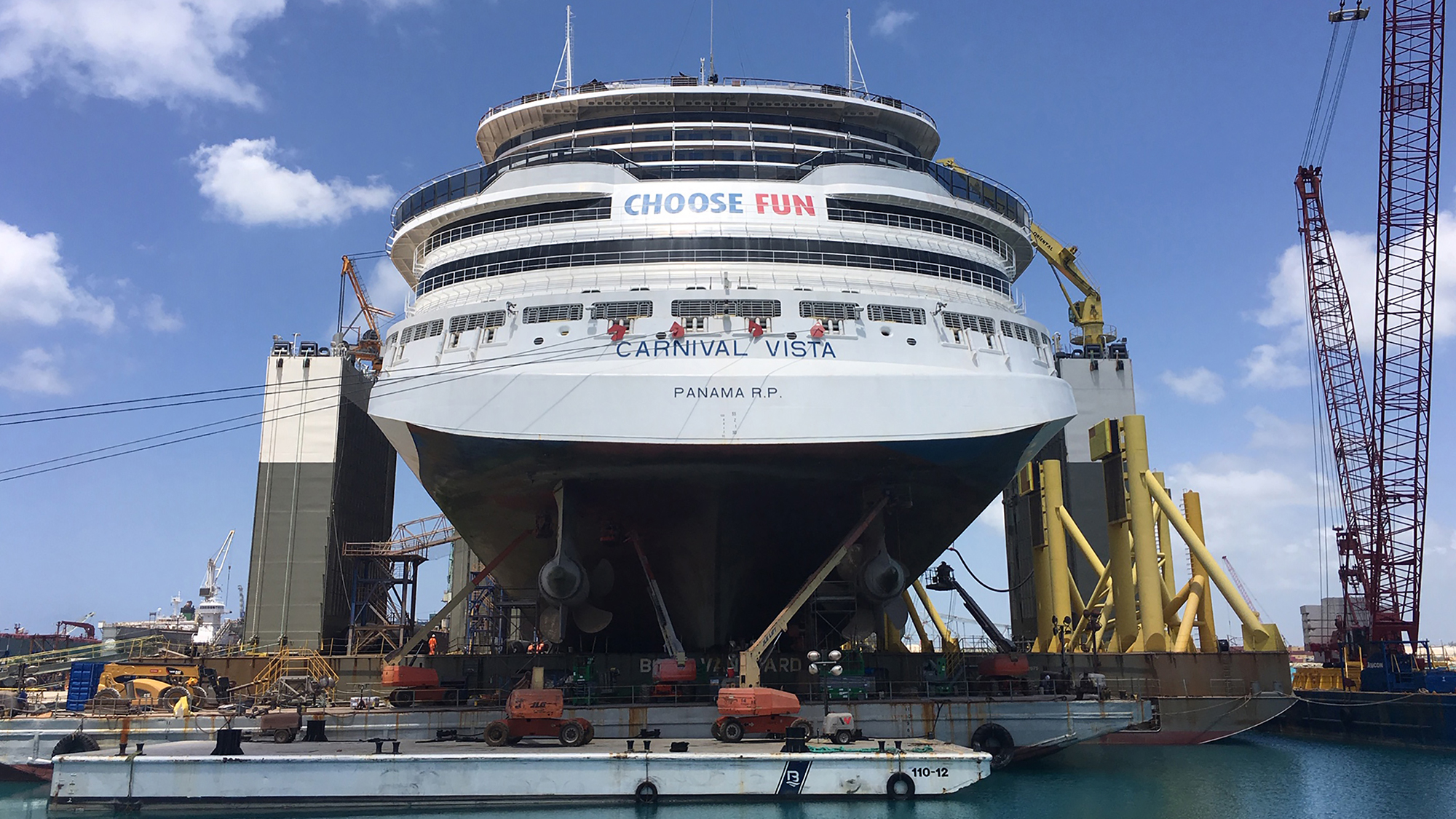 The aft end of the Carnival Vista on the Boka Vanguard at the Grand Bahama Shipyard.

Damage to a drydock facility at the Grand Bahama Shipyard in the Bahamas is proving inconvenient and expensive for the cruise industry, and it demonstrates how few drydock options exist on the U.S. East Coast.

The damaged drydock, the largest of three at Grand Bahama, was put out of commission on April 1 when a crane collapsed while raising the stern of the Oasis of the Seas to repair its propulsion pods.

The accident forced Royal Caribbean Cruises Ltd. (RCCL) to take the Oasis to a yard in Europe to finish repairing it.

The repairs, plus the cost of three canceled Oasis cruises, will pare an estimated $52 million from RCCL’s 2019 earnings.

But Royal is not the only line affected by the loss of the Bahamas drydock.

In June, Carnival Cruise Line’s 4,000-passenger Carnival Vista also developed a problem with its Azipod motors that required immediate replacement of their bearings. Normally, the work would have been done in drydock at Grand Bahama, a facility jointly owned by RCCL and Carnival Corp.

But on June 20, Carnival Cruise Line disclosed to investors that because it was not possible to use Grand Bahama, the ship would go out of service for 17 days, and three July cruises from Galveston, Texas, would be canceled.

The cost was projected at between $50 million and $62 million, partly because it will take more time to complete than it would have if the ship had been drydocked in the Bahamas.

Carnival turned to what it said was a “first of its kind” solution, loading the entire ship onto a semi-submersible, heavy-lift transport vessel, the Boka Vanguard, built to haul offshore oil and gas drilling rigs.

The loading and lifting operation was scheduled for the weekend of July 12 to 14, after which the Vista was to head for the Grand Bahama yard for the repair work.

Both situations underscore how dependent cruise lines are on Grand Bahama Shipyard for drydock space that is within a quick sailing distance from their headquarters in Florida and from ports on the Eastern Seaboard.

Walter Nadolny, assistant professor of marine transportation, ship construction and stability at the State University of New York’s Maritime College, said there are several reasons for the infrastructure deficit.

One is that costs are low in the Bahamas.

“The United States is the most expensive place in the world to build and repair a ship,” Nadolny said. Most U.S. shipyards of the size needed to work on late-model cruise ships are accustomed to cost-plus contracts from the U.S. Navy and are too expensive, he said. 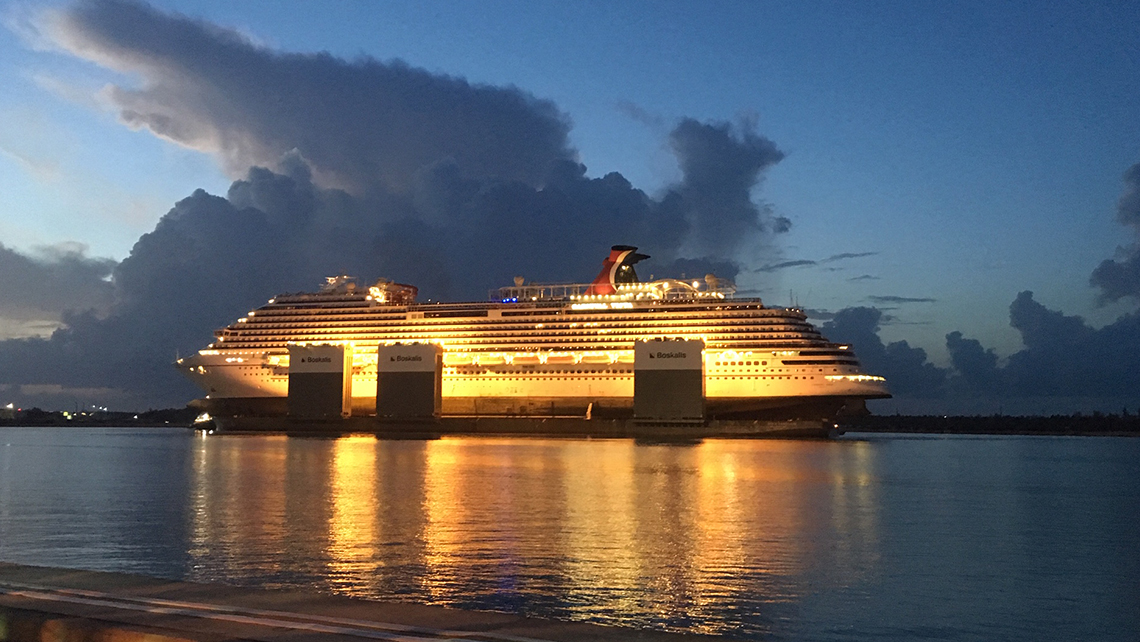 The Carnival Vista arrives at night in Grand Bahama after being picked up by the Boka Vanguard.

Second, the specialized gear and materials have been concentrated in Grand Bahamas and are not easily duplicated.

“If they brought [the Carnival Vista] into Jacksonville Yard, in Jacksonville, Fla., right now by bringing in all the stuff they need to do the repair, they’d be incurring duties,” Nadolny said. “The logistics they need are probably sitting in the Bahamas, which means we’ve got to bring people in, we’ve got to bring equipment in, [and] it could be stuck in customs.”

Cruise lines have grown to rely heavily on Grand Bahama because most of what they do there is routine refurbishments that are predictable and can be scheduled well in advance, he said.

But unforeseen situations are posing more of a challenge. “The intricacies of changing out Azipods make it a little more difficult,” Nadolny said.

Carnival had the option of sending the Vista to Europe, where cruise ship drydocks are more numerous, Nadolny said, but that would have meant extra transit time.

Before 2000, when the predecessor of Grand Bahama Shipyard was founded in Freeport, cruise lines were more dependent on U.S. yards. For example, when the Carnival Ecstasy caught fire leaving Miami in 1998, it was sent to the giant Newport News Shipbuilding yard in Hampton Roads, Va.

But ships have been growing in size.

“The reason why Grand Bahama came about is specifically that there were no large drydocks in the southeast part of the U.S. that could accommodate these mega-cruise ships,” said Lawrence Rapp, principal consultant at Seawise Consulting, which focuses on new building and refurbishment management.

After the previous operator of the Freeport yard went bankrupt, Carnival and Royal Caribbean invested in it.

“That’s worked reasonably well until this accident,” Rapp said. “The only real fallback that exists is Newport News, but they’re committed to Navy contracts. If the Navy ship isn’t finished, then you don’t get the dock, so it’s just not reliable enough for the cruise industry.”

Phone and email efforts to reach the yard for comment were unsuccessful.

Problems with podded propulsion systems continue to dog the industry, making the need for repair facilities acute. The sister ship of the Oasis of the Seas, the Allure of the Seas, is currently operating at less than full speed because of a technical problem with one of its pods.

In May, Royal Caribbean International sent a letter to passengers booked on the Allure saying that the ship would be leaving some ports early and substituting some ports for others through October because it could not sail at full speed.

Nadolny said the only cost-effective drydock alternative to Grand Bahama for ships needing work along the East Coast would be another Caribbean facility.

He said a yard could be built in another offshore location; Haiti, for example. But it would require that country to say “We want to do this” and then devoting the necessary resources.

Rapp said that keeping a drydock operation in the black can be tricky.

“There are a lot of risk factors,” he said. “It’s hugely capital intensive. There are all sorts of labor issues. It’s not something that’s easy to make money with. You look at a drydock bill for a big cruise ship and you think ‘Look at all that money.’ Most of it is going to subcontractors for interior refurbishments and so on.”

He added: “The amounts going to the shipyard are substantial, but they’re not constant, and they’re not reliable.”