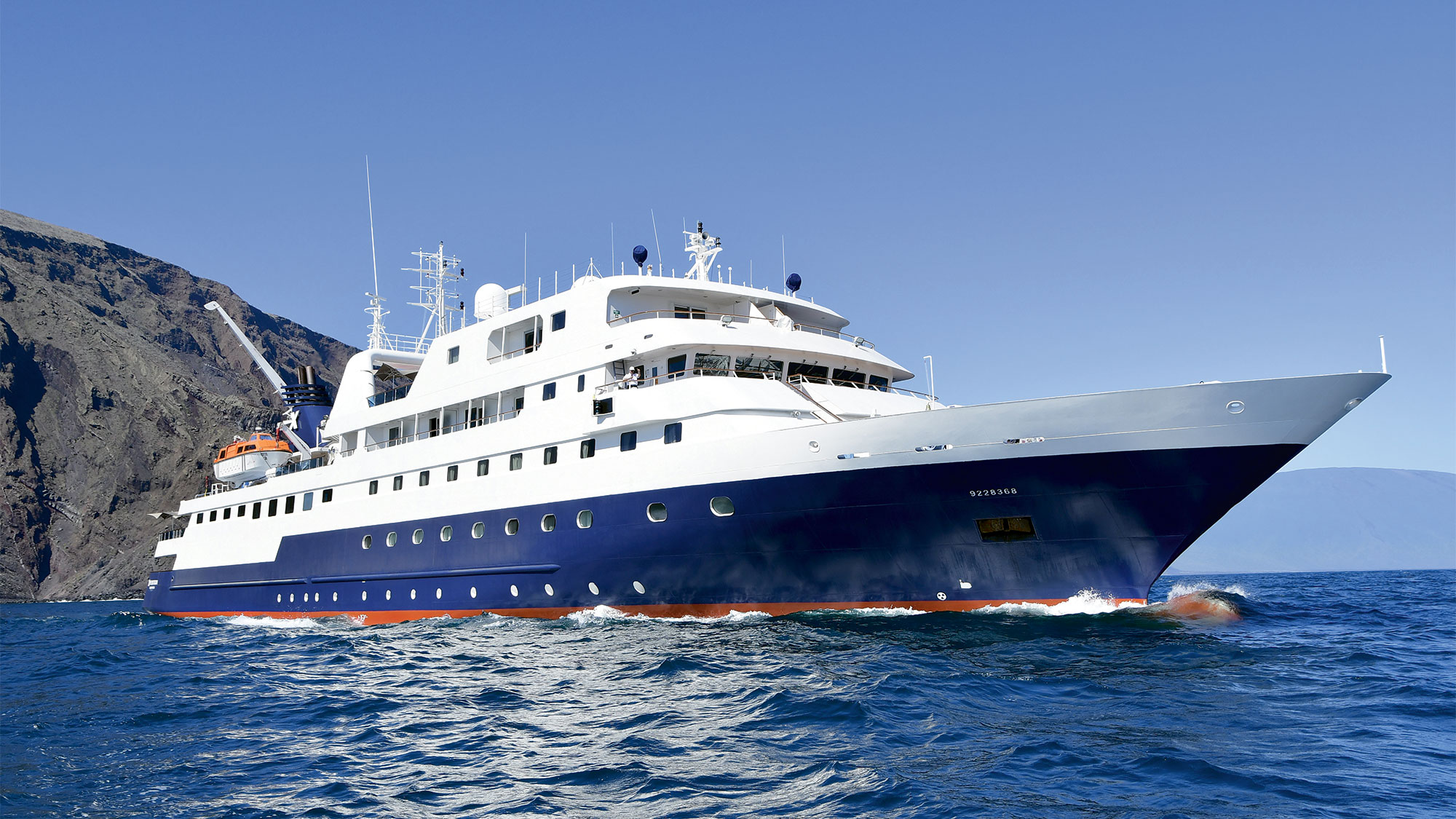 Celebrity Cruises’ Xpedition, which has the look of its time: More portholes than private balconies, for example. Photo Credit: Daniel Romagosa/Celebrity Cruises
by Tom Stieghorst
Back when I first started writing about cruises, in the mid-1980s, one of the things that really excited me about the job was the modern new cruise ships being built in places like Finland and France.
They were getting bigger, fancier, with terrific new amenities and style. It was a pleasure to be able to describe them to readers who at that time probably didn’t know what the new ships were all about.
But there were other ships that I toured, older tonnage that still had a niche in the industry. I remember a lot of Greek ships that were way past their prime; Scandinavian car ferries converted to cruise duty; and ocean liners that were years out of date.
I was reminded of those days recently while touring Celebrity Cruises’ Celebrity Flora, which is nearing completion at a shipyard in Rotterdam. It is the first ship purpose-built for the Galapagos Islands and looks like it will be a dream to sail.
The Flora is a new standard for an area of the globe that has been getting by on older tonnage for a long time. Galapagos-based ships include Celebrity’s own Celebrity Xpedition, which was built in 2001 for Sun Bay Cruises and acquired by Celebrity in 2004 when it began cruising there.
The Xpedition has the classic look of ships of its era: more portholes than balconies, for example. It carries 96 passengers compared to 100 for the Celebrity Flora, but at 2,842 gross tons, it is only half the size of the 5,739 gross-ton Flora. 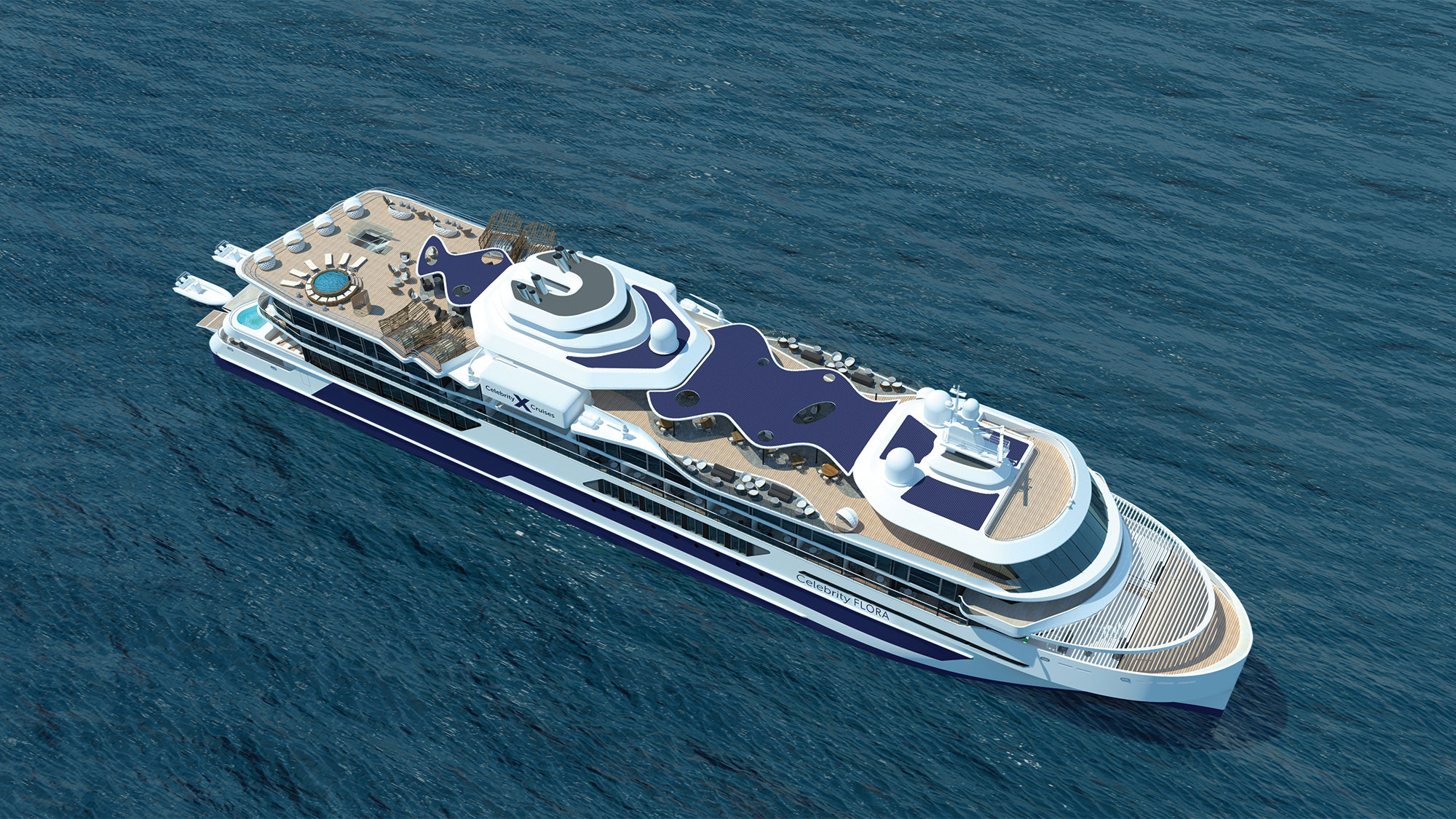 A rendering of the Celebrity Flora, an example of the new standard in cruising, which will replace the Xpedition in the Galapagos.
To be sure, seeing the wildlife in the Galapagos is the major focus of any cruise there; the hardware is secondary. But if you can go in style, comfort and, indeed, luxury, why not?
One of Celebrity’s quasi-competitors in the Ecuadoran islands is going through a similar transition with its product. Next year Silversea Cruises will introduce the Silver Origin in the Galapagos and retire the Silver Galapagos, which was once part of the original, 1990s-era, Renaissance Cruises fleet of 100-passenger ships.
These new ships are going to raise the bar for the other licensed vessels, many of them small, that offer cruises in the Galapagos — much the same way that the Carnival Fantasy and Sovereign of the Seas prompted some changes for the Chandris family when it was sailing classic ships like the Britanis out of Florida. John Chandris eventually concluded that was a hopeless strategy, and he started Celebrity Cruises to focus on newly built ships such as the Celebrity Horizon. Today, Celebrity survives and thrives as a division of Royal Caribbean Cruises Ltd., which bought it in 1997.
Silversea Cruises has also joined the RCCL stable, by virtue of a sale of a 67% interest last year. One of the first things RCCL management did after the purchase was to announce a new Silversea ship for the Galapagos.
The two RCCL ships are going to set a new benchmark for cruising in the Galapagos and may spell the end for some of the less contemporary vessels in that market.

The Celebrity Flora will debut in May 2019.FORT LAUDERDALE — Celebrity Cruises has designed a new ship for use in the Galapagos, a rare newbuild in the market and at 100 passengers the smallest ship parent company Royal Caribbean Cruises Ltd. has ever built.

Celebrity president Lisa Lutoff-Perlo said that only in a market with such high demand and limited supply would the economics of building a ship of that size make sense for a brand like Celebrity.

“On a per-berth basis, it’s really hard to get a return on these ships,” Lutoff-Perlo said. “The Galapagos is different.”

The number of ships that can operate in the Galapagos is restricted by the Ecuadoran government and the size is limited to 100 passengers or less, so prices tend to be relatively high.

A seven-night Galapagos cruises on the Celebrity Xpedition is listed on Celebrity’s website starting at $4,399 per person.

The news was announced at CruiseWorld, Travel Weekly’s conference here.

The new ship, named Celebrity Flora, will be built in a Dutch shipyard and debut in May 2019. Lutoff-Perlo declined to say how much it will cost but said it is a fraction of Celebrity’s bigger ships.

Although it will carry the same number of passengers, the Flora will be twice the size of the Xpedition, allowing for more features. “We’re able to do more outdoor spaces and more public space for our guests,” Lutoff-Perlo said.

It will have a small pool, which Xpedition does not, and two restaurants and two lounges, where Xpedition has one each. There will be more crew space so the Flora will have one naturalist for every 12 guests, up from a 1:16 ratio on Xpedition.

Opting for a new ship enabled Celebrity to design storage space in the hull for three Zodiac boats that are stored on deck on the Xpedition. The Flora’s two 1,288-square-foot Penthouse suites will be the largest in the Galapagos.

The design of the ship will be consistent with the new Celebrity Edge and other larger Celebrity ships, but with an emphasis on the neutral, natural and organic, Lutoff-Perlo said. Lounges, suites and restaurants will have floor-to-ceiling windows to facilitate wildlife viewing.

About 50% of the accommodations will incorporate the virtual balcony concept that will debut on the Celebrity Edge.

Celebrity’s emphasis on facing out toward the ocean will be reflected in all beds being positioned to face a window.

The top deck will have four stick-style cabanas that will be available for day rental and for sleeping out on deck under the stars.

Celebrity Cruises will expand its Celebrity Xpedition brand in the Galapagos islands by acquiring Ocean Adventures.

Founded in 1999, Ocean Adventures has two vessels: the 48-passenger Eclipse and the 16-guest catamaran Athala II. The expansion gives Celebrity more capacity in the Galapagos, where the government requires ships to carry 100 passengers or less.

After the acquisition, the two Ocean Adventure ships will continue to offer their current onboard experience until a scheduled drydock in January 2017, after which they will offer Celebrity’s service, food and amenities. All existing Ocean Adventures bookings and block space commitments will be honored and will remain unchanged, regardless of the date of sailing, Celebrity said.

The Xpedition accommodates 98 passengers. It sailed from 2001 to 2004 for Sun Bay Cruises under the name Sun Bay 1.