The Flying Clipper will be delivered in the first quarter of 2018, as the delivery of the newest Star Clippers’ ship has been pushed back from August 2017.

A spokesperson from Brodosplit, the shipyard in Croatia building the unique 300-passenger sailing vessel, confirmed the updated delivery date in an email to Cruise Industry News.

“Brodosplit has been recognized as one of the few shipyards that are capable for building such unique ship, from the design phase, building and fitting it with complex equipment and luxury interiors. Estimated time of delivery is the first quarter of 2018,” said the spokesperson. 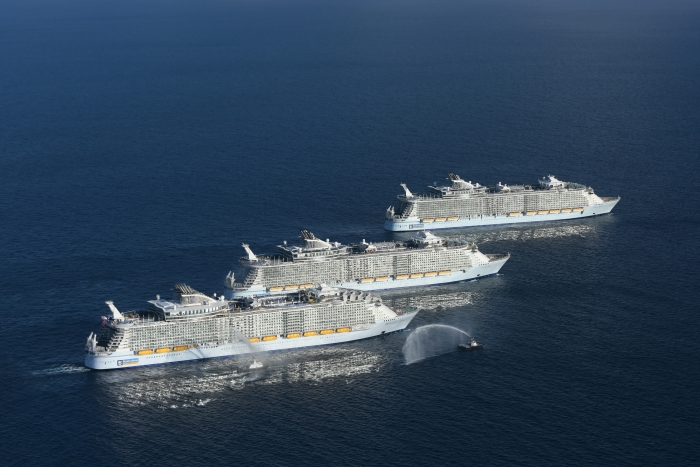 The cruise industry has embarked on a newbuilding program unlike anything seen before. The IHS Markit database lists 62 vessels on order. However, if the 10 ships Genting Hong Kong group said it plans to build at MV Werften in Germany and other options are included, that figure moves closer to 80, a record high for the industry.

In the mass cruise ship market, which accounts for most of the existing fleet and new orders, owners are mainly ordering ships of 180,000 to 200,000 gt.

Recent examples are Royal Caribbean International’s two Icon-class 5,000-passenger capacity vessels the company said on 11 October it would build at Meyer Turku in Finland. They will have about the same capacity and probably a similar gross tonnage as the two 5,400-passenger, 180,000 gt vessels the US-UK cruise company Carnival Corporation & plc has ordered for the Miami-based Carnival Cruise Line. At the same time, it also ordered another similar unit at Meyer Werft in Papenburg for P&O Cruises in the UK.

About five years ago, the average size in the mass cruise ship market was in the 140,000 to 160,000 gt bracket, while the first 100,000 gt cruise liner – Carnival Triumph – was only built in 1996. Economies of scale drive this development: large vessels are hugely efficient, and large fleets of such ships transcend that efficiency from ship to company level.

From the perspective of the shipbuilders, contractors, and suppliers working in this sector, the present situation and continued bullish outlook mean unprecedented opportunities. However, the ever-expanding commitment of capital for mainly very large vessels means that in the case of a severe downturn in the cruise industry, the negative effects would almost certainly be felt throughout the value chain. A sharp downturn in the global economy, geopolitical events, and terrorism could all potentially trigger such headwinds.

The boom is changing the landscape of operators, as MSC Cruises and Genting Hong Kong plan to add proportionally more capacity than their larger competitors, such as Carnival Corporation, Royal Caribbean Cruises, and Norwegian Cruise Line Holdings.

It has also changed the landscape of the cruise shipbuilding sector. While three key groups continue to dominate the scene, new entrants have emerged. Fincantieri in Italy, the Meyer group with yards in Germany and Finland, together with STX France remain by far the largest builders, both in terms of vessel numbers and their gross tonnage.

However, as slots at these yards have become increasingly difficult to obtain, the Genting Hong Kong group that owns Crystal Cruises in the US plus two Asia-focused lines, Dream Cruise and Star Cruises, acquired three shipyards in Germany that it renamed MV Werften. Genting’s aim is to build vessels for all three brands at its own yards.

This new departure involves both opportunities and risks. As slots are hard to obtain at the leading builders, Genting will be able to agree deliveries of newbuildings with a shorter lead time and at the intervals its brands require.

On the flip side, the complexity of managing such projects and the fact that the arrangement brings both ship operating and building risks under a single roof cannot be ignored. Maintaining a high rate of capacity utilization through design, steel work, and fitting out, plus the management of the projects so that deliveries take place on time and on budget are all elements Genting will have to ensure.

On 23 September, Carnival Corporation & plc said it had signed an agreement to build up to four 133,500 gt cruise liners at China State Shipbuilding Corporation (CSSC) in China for the local market.

The vessels will be based on the Carnival Vista class, a platform shared by the Carnival Cruise Line, Costa Crociere, and P&O Cruises Australia brands of the Carnival group, at Fincantieri, which has set up a joint venture with Carnival and CSSC to develop cruise shipbuilding in China.

Mitsubishi Heavy Industries, which won an order for two 124,500 gt ships from AIDA Cruises, a German unit of Carnival group, has decided to pull out of cruise shipbuilding after major delays and deep losses from the two ships. These were prototypes and Mitsubishi did not team up with an experienced cruise shipbuilder to work on the project. Two vessels are unlikely to produce a learning curve, although AIDA might have ordered more units of the same type had the first two vessels been built on time and budget.

Operators of expedition cruises have started to place orders for new tonnage after the IMO in 2016 approved its Polar Code, which sets technical and crew training requirements for cruise ships that trade in high latitudes, north and south, from the start of 2017. So far, these new buildings have been in the 10,000 to 25,000 gt size range: they are much smaller than the contemporary market units now on order, but nevertheless larger than most expedition cruise ships currently in service. Most of them will also be fitted out to much higher standards than the majority of the existing tonnage in this category.

These smaller vessels do not fit in the production schedule of builders of large cruise liners, which means that yards in Norway that mainly built offshore services tonnage have found a welcome new market. MV Werften and Uljanik and Brodosplit in Croatia have also won expedition cruise ship orders.

The smaller size of these vessels means that both the technical and financial risks linked to them are much smaller than those of very large vessels. As the expedition cruise market is not as developed as the mainstream one, many shipbuilders have produced their own portfolios of concept designs that they can offer their prospective customers. Whereas in mainstream cruise shipbuilding, it is mainly the owners who produce concept designs.

For the same reason, ferry owners have started to look at shipyards other than major cruise shipbuilders to carry out their newbuilding projects. A sharp fall in the price of oil since late 2014 negated a feared steep rise in bunker costs following the introduction of the Sulphur Emission Control Area (SECA) in northern Europe at the start of 2015. Ferry companies’ results have been better than were anticipated in 2014, and this has led them to begin renewing their often ageing fleets.

Cruise shipbuilding differs markedly from dry bulk carriers, tankers, and container vessels, which are often of a standard design. Cruise liners, however, are of bespoke design to the owner and all aspects of a build are crucial in successful execution of a project. The threshold for a shipyard to enter the sector is therefore very high. Instead of the rapid roll-out of a standard design project, the focus in cruise shipbuilding is on managing complex flows and sequences of events. Failure is likely to result in deep losses that can run into nine-digit figures in dollar terms, as in the case of Mitsubishi.