The QE2 is apparently falling into disrepair in a dock in Dubai, but plans are afoot to save it. 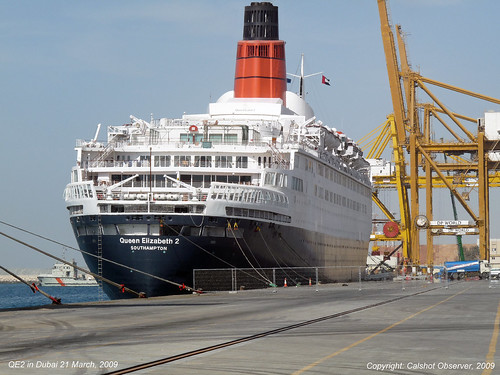 Calls to save the historic QE2 ocean liner from the scrapyard are growing louder as campaigners say it lies “filthy, forlorn and neglected” in a Dubai dock.

The Queen Elizabeth 2, launched by the Queen in 1967 and Cunard’s flagship liner for 40 years, was retired and sold to the UAE government conglomerate Dubai World for £64million in 2008. The ship was destined to become a luxury hotel but since plans stalled in 2013 after the economic downturn, it has languished in Port Rashid.

• Is Glasgow going to save the QE2?

The engine was turned off in 2013 and the ship has since suffered from mould thanks to the country’s hot, humid conditions. Concerned campaigners say they have heard nothing from Dubai to suggest that the QE2’s future lies anywhere but in the scrapyard and argue that to let such an iconic ship go to ruin would be a travesty.

The QE2 “forlorn and neglected” in Dubai

One campaigner even believes that the QE2 could be saved for just £3million.

“Its scrap value is decreasing, and weighted against the cost of decontaminating the ship – as it’s got asbestos – it could probably be bought for about £3million,” said Rob Lightbody, a member of online campaign group The QE2 Story

“The options now are to scrap it – but clearing it out would cost millions and millions – or just leave it somewhere.

“It’s just sitting in Dubai. Nothing has happened to it in the last two and a half years. There’s no power. There’s no air. She’s filthy.”

Mr Lightbody wrote in a report on the QE2’s history that the ship now “looks forlorn and neglected.”

He said that if she were sat in a dock in Southampton she would not have been treated like this, adding that she is just seen as an inconvenient problem in Dubai.

The original planned hotel in Dubai.

The QE2 was in fine shape in 2011, according to Mr Lightbody, who said that it was only once the engines were turned off in 2013 that she fell into disrepair. He said tourists are kept away from the ship.

He added that he would be happy to see the liner to rest somewhere associated with its history: Southampton, Liverpool, London or New York.

He told Telegraph Travel the situation surrounding her ownership was confusing as nobody seemed to be taking responsibility for her.

• The farewell cruise of the world’s most famous cruise ship, the QE2

“Her future most likely will be the scrapyard,” he said.

“Of course it is sad. But I truly don’t believe in hotel ships. If you are going to save a ship then have her as such. Dubai just wanted to rip her apart and turn her to into something like Las Vegas.”

Drydocks World, which is owned by the Dubai government and where she is currently docked, did not respond to a request for comment.

Last weekend another QE2 campaigner used Cunard’s 175th anniversary celebration in Liverpool as an opportunity to raise awareness of the liner’s plight and hand out flyers.

If the QE2 were to be saved, it would not be the first time the Telegraph had had a hand in the salvaging of an old liner. In 2006 the Swan Hellenic, a floundering P&O liner, was purchased and revived by Lord Sterling after a “Save our Swan” campaign run by Telegraph Travel was firmly supported by its readers.