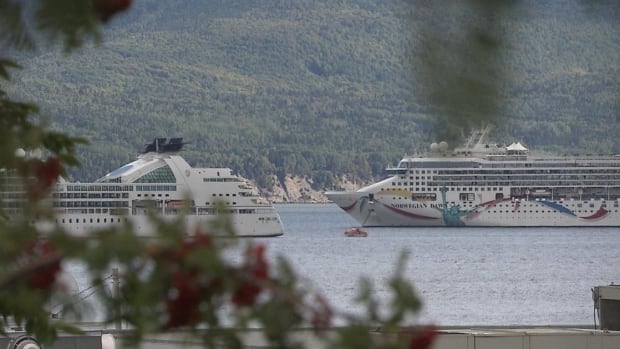 New speed restrictions on ships sailing waters in eastern Canada where North Atlantic right whales have been congregating have forced cruise lines to shorten port stays and drop some calls.

For example, Cunard Line’s Queen Mary 2 will call at Sept-Iles on Oct. 2 due to speed limits implemented for the west section of the Gulf of St. Lawrence. The 151,000-gross-ton liner is one of the largest ships to visit the fishing and mining town of 26,000 people.

Emergency rules adopted in mid-August limit all ships over 20 meters long to speeds of 10 mph or less in a vast swath stretching from the northern shore of the St. Lawrence River south to near Prince Edward Island.

Canadian minister of transport Marc Garneau said the slowdown will stay in place until the endangered whales migrate out of the region, which could be sometime in September or October.

But a half-dozen cruise lines have already adapted their schedules to the slower cruising speeds, shaving hours off of stays in ports to make up the difference or moving their ships to spend more time out of the restricted zone.

“The problem is twofold,” said Donna Spalding, director of administration, CLIA Northwest and Canada. “We recognize the speed restrictions were put in to protect the species at risk. The short notice is an issue for cruise lines, because they have guests who were expecting a certain product, but it’s also a significant liability for the small communities on the East Coast that rely very heavily on the fall season. For those communities that were geared up for the business, it is a huge blow.”

One port that has been impacted is the small Canadian town of Gaspe on the western shore of the Gulf of St. Lawrence. Cruise lines that have dropped calls there include Norwegian Cruise Line and Regent Seven Seas Cruises. Gaspe mayor Daniel Cote estimated that the town of 15,000 will lose about $2.5 million as a result.

The port of Sept-Iles in Quebec.

Also affected has been the Port of Charlottetown on Prince Edward Island, which will lose an estimated 8,000 cruise passengers this season as a result of 10 canceled calls from several cruise lines.

But some communities are benefitting. As cruise lines revised their itineraries, Sydney, Nova Scotia, gained two calls from the Norwegian Dawn, two from the Seven Seas Mariner and one from the Silver Whisper, said Nicole MacAulay, acting manager of cruise marketing for the Port of Sydney. “We’re well outside of the [slow-speed] zone,” MacAulay said.

Last year, Sept-Iles had a total of four cruise ship calls. Cunard’s first call there was scheduled to happen in 2018, but the line requested to go there at the last minute to limit the impact of speed restictions.

Most cruise lines say their primary response has been to shorten port calls to gain added cruising time. Holland America Line, for example, has shifted departure or arrival times by about an hour on either end of stops for its four ships that sail itineraries between Quebec City and Charlottetown.

Transport Canada and the Canadian Department of Oceans and Fisheries announced the reduced-speed zone on Aug. 11 after 10 whale deaths in the gulf since June 7. Fishing gear entanglements and ship strikes were the apparent causes.

Spalding said the migratory pattern for the whales appears to be changing. Previously, they spent more time off the coast of Maine, where there is a defined sanctuary and detection buoys with hydrophones provide real-time information to ship captains about the presence of whales, she said.

Ships slowed down when whales were detected. “Once sounds confirm the whales have moved, the restrictions are lifted,” Spalding said.

If the migration pattern has changed permanently, a high number of whales in the Gulf of St. Lawrence pose problems for future cruise seasons there, Spalding said. CLIA is working with the Canadian government to address the issue.

“We believe there are other ways to be sure ships have better information about where the whales are,” she said.