Led by Captain Kate McCue, the first American female cruise ship captain, who was accompanied by 26 other women representing 16 different countries, the Celebrity Edge sailed out of Port Everglades and began its seven-day Caribbean journey.

Retiring Pilot Boat Captain Cheryl Phipps, one of only a few female pilot boat captains in the country, led the ship out to sea.

Also, in celebration of International Women’s Day, Celebrity Edge-lit up the high seas with a vibrant purple glow, the colour associated with the day.

“I fell in love with cruise ships at age 12 when my family took its first cruise vacation. At the end of the trip, I asked my Dad if he thought I could be a cruise director someday and he replied that I could drive the ship if I wanted to. Five years later, I enrolled at the California Maritime Academy and nineteen years later I became a Captain,” said Captain Kate McCue. “I firmly believe that you have to see it, to be it. My hope is that today we inspire a new generation of young girls and women to chart their own course of pushing boundaries and breaking barriers to be whatever it is they want to be.”

“To ‘man the bridge’ with 100% women and to fill every leadership role onboard with women is truly significant. I am so proud of these accomplished women, who worked tirelessly to be the best person for the job in a traditionally male-dominated industry and I am honoured to work alongside them,” said Lisa Lutoff-Perlo, president and CEO, Celebrity Cruises. “Advancing gender equality in our industry takes a purposeful and focused commitment because it is not easy. This is such meaningful progress and we’re just getting started.”

Onboard for the sailing are women in other fields including Madeline Stuart, the first Supermodel with down syndrome; Kellee Edwards, the first black woman to host a national adventure travel show; and child prodigy artist Autumn de Forest; international jewellery designer Reout Kallati; and fashion designer Mary Frances. The seven-night sailing will celebrate other female achievements through a variety of events including panel discussions, gallery exhibitions featuring female artists, excursions to women-led businesses in the ports the ship visits, and a cinema series putting female directors, actors and inspirational narratives centre stage. 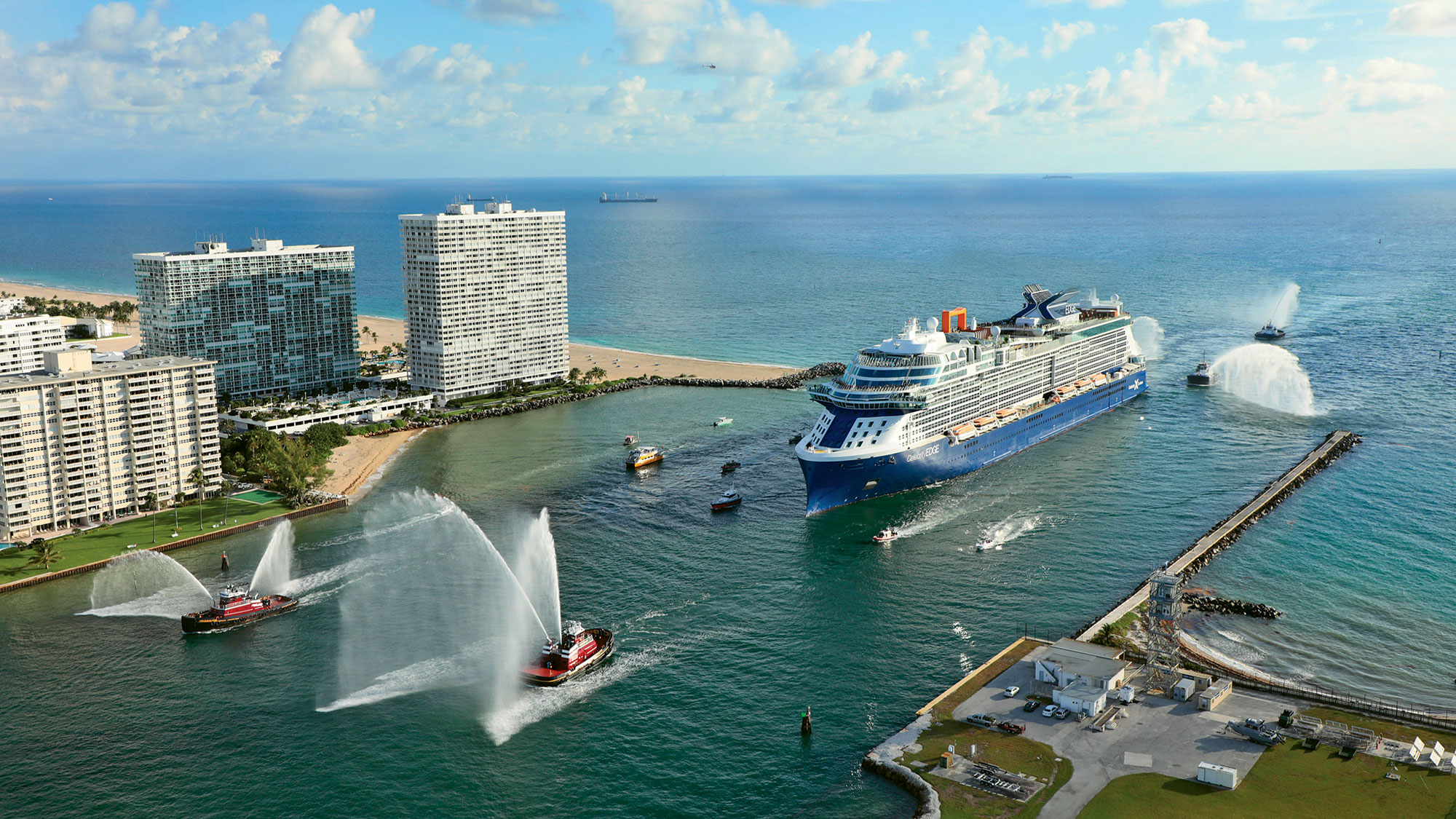 Both the terminal and the ship sport high design and state-of-the-art technology. The terminal will operate an expedited arrivals process and a dedicated lounge for premium guests booked in The Retreat.

Chock full of new features, the Edge’s signature amenity is the Magic Carpet, a nine-ton movable platform cantilevered on one side of the ship, which can serve as a dining venue and a shore excursions departure platform.

“This has been more than four years in the making,” said Celebrity CEO Lisa-Lutoff-Perlo, who shepherded construction of the ship at the Chantiers de L’Atlantique shipyard in St. Nazaire, France, along with Royal Caribbean Cruises Ltd. chairman Richard Fain and RCCL executive vice president maritime and newbuilding Harri Kulovaara.

The Edge, which will sail from Port Everglades during the winter on Caribbean itineraries, is designed to carry 2,900 passengers, the same general capacity of Holland America Line’s Nieuw Statendam, which debuts next month, and Virgin Voyages’ inaugural ship the Scarlet Lady, which is scheduled to arrive in January 2020.