Norwegian Encore outside Meyer Werft where she was built.

NEW YORK — The Norwegian Encore arrived here Monday to make its debut as the newest Norwegian Cruise Line ship and take a bow as the last in the Breakaway Plus class.

Travel sellers who have seen any of the Encore’s sisters — the Escape, Bliss or Joy — will be familiar with the basic layout of the ship. But there are always modifications to each ship in a class, and so it is with the Encore. Norwegian has added a chic new restaurant, Ondo by Scarpetta, and brought on new evening entertainment.

The ship is also notable for being the last to be delivered to president and CEO Andy Stuart, who is leaving the company and will be replaced in 2020 by Harry Sommer.

In an interview on board the Encore, Sommer said the Norwegian brand was “in a great place,” and a priority would be to “spend more time on that marketing message to really have guests understand what a fascinating experience, a fantastic vacation a ship like this represents.

A popular feature of the Norwegian Bliss is the Speedway race track, where passengers can drive go-karts. Photo Credit: Dave Jones

“I credit Andy for creating experiences — a combination of ships, restaurant choices and activities onboard — that really provide a wonderful vacation for our guests,” Sommer said. “We’re not changing that.”

A two-day, pierside preview of the Encore was conducted for travel partners, VIPs and media ahead of the ship’s repositioning to South Florida.

The experiences on the Encore appear at first glance to be tilted toward active ones. The aft sections of the top decks are devoted to activities like the Speedway, a fast-paced, go-kart ride that got its start on the Norwegian Joy. Waterslide options include the Ocean Loops, which, as its name suggests, drops riders down a tube that twists up and down and beyond the edge of the ship.

On Deck 17 are the Galaxy Pavilion, a room with multiple virtual-reality games, simulator rides and an escape room.

Even the evening performance in the Encore Theater was active in a sense. “Choir of Man” features about a dozen young men singing and playing contemporary and classic hits in unique and fun ways under the pretence of hanging out in an Irish pub. In the hour-long show, the performers sing (occasionally in beautiful a capella harmony), dance and play live instruments. As I said, it was active: The show brought the audience to its feet for two standing ovations.

However, the Encore isn’t all about heart-racing activity. The ship also has a large observation lounge that wraps around the forward section of Deck 15, where there are couches, loungers and nooks galore for relaxing with a Kindle and a coffee (a Starbucks shop is located on Deck 6). Or if the sun is what passengers desire, there is the Vibe Beach Club, which occupies the topmost Deck 20 of the Encore. Additional relaxation options are offered to Haven passengers in an exclusive zone of the ship.

As far as dining options, the Encore introduces Onda by Scarpetta, an a la carte Italian restaurant. There are about 20 eateries on the Encore, from old favourites like Le Bistro, Cagney’s Steakhouse and Teppanyaki to relatively newer entrants such as Ocean Blue and the Food Republic.

“It’s the first time we’ve had such a presence on the West Coast,” said Andy Stuart, president and CEO of Norwegian Cruise Line (NCL), during Virtuoso Travel Week, held at Bellagio Las Vegas.

The line’s upcoming Norwegian Bliss — what Stuart referred to as “our most incredible ship to date” — will launch operations on the West Coast in June 2018. It will bring new features to the American market, as well as employ highlights from two previous Breakaway Plus ships: Norwegian Escape and the Chinese market’s Norwegian Joy.

The 4,000-passenger Bliss will debut June 2, sailing a series of weeklong cruises to Alaska and departing Saturdays out of Seattle. Noting that it is the first time that a brand-new ship will launch Alaska cruises, Stuart pointed out that Bliss has been designed especially for Alaska, underlined by its hull art, titled “Cruising with the Whales.”

In addition to scenic glacier cruising, the vessel will make calls in Ketchikan, Juneau and Skagway in Alaska and Victoria, British Columbia, through September 2018. Starting Oct. 5, 2018, Bliss will initiate a month of weeklong Mexican Riviera cruises (roundtrip from Los Angeles), with visits to Puerto Vallarta, Mazatlan and Cabo San Lucas. On Nov. 3, Bliss will set off on a 14-day Panama Canal cruise from Los Angeles to Miami, where the ship will spend its winter season offering Eastern Caribbean sailings.

According to Stuart, NCL’s Alaska cruises are quite popular, particularly because it is a bucket- list item for many travelers, and the line is also seeing more families booking the destination.

“As Alaska is very limited in berthing capabilities, the only way to increase capacity there is to bring a larger ship — and we think this is the right ship, offering compelling experiences for those new to cruising, plus those features that our loyal guests know and love,” he said. 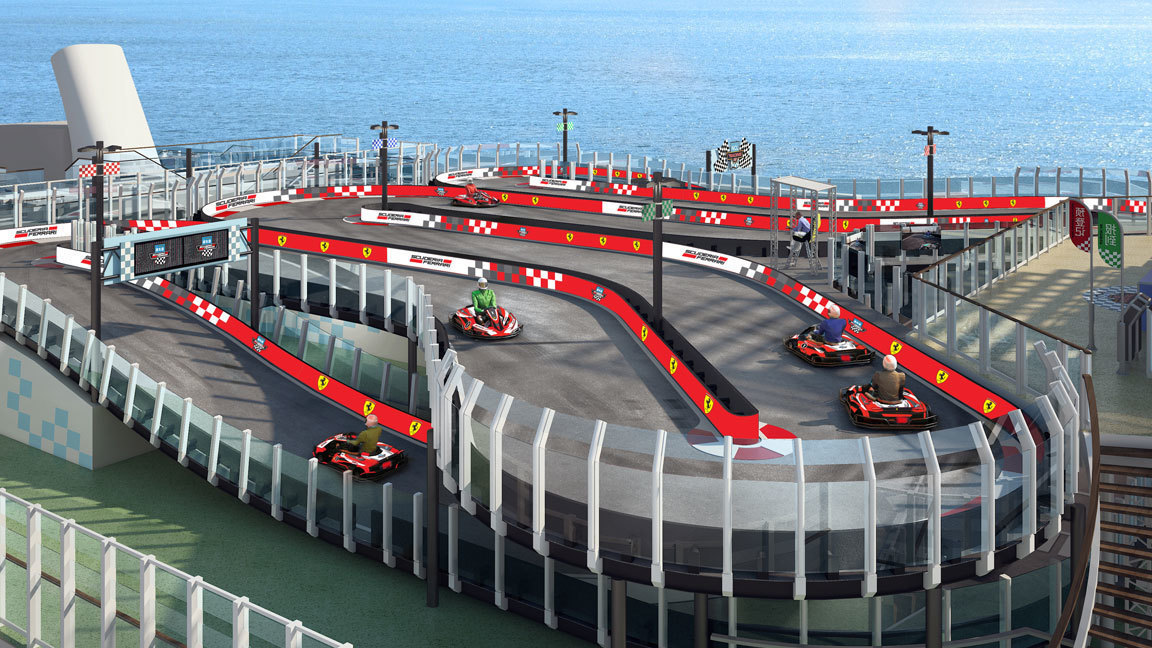 Bliss will integrate the most popular features from previous ships, particularly on the top deck. There will be an expanded version of the electric car race track the debuted on Joy in China; it will be the longest race track at sea, at nearly 1,000 feet long, with four speed settings for the novice, intermediate and advanced drivers navigating its twists and turns. Another dramatic feature will be the open-air laser tag course, which will be designed as an abandoned space station in which guests can compete against one another while armed with state-of-the art laser guns.

In addition, Bliss’ top deck will have an Aqua Park with two multistory waterslides. The high-speed Ocean Loops will have one loop that extends out over the side of the ship and a second see-through loop down to the deck below. The tandem Aqua Racer slide will send guests racing side-by-side on inner tubes for more than 360 feet, with a translucent section that provides views of the sea.

Younger cruisers will have their own Kids’ Aqua Park, with splash pads, water cannons, tipping buckets and slides. And there will be segmented facilities for passengers ages 3 to 12, as well as for teenagers, who can enjoy their own space — dubbed Entourage — on deck 5. There will even be a Guppies playroom with sensory play activities for babies six months old to 3 years old. 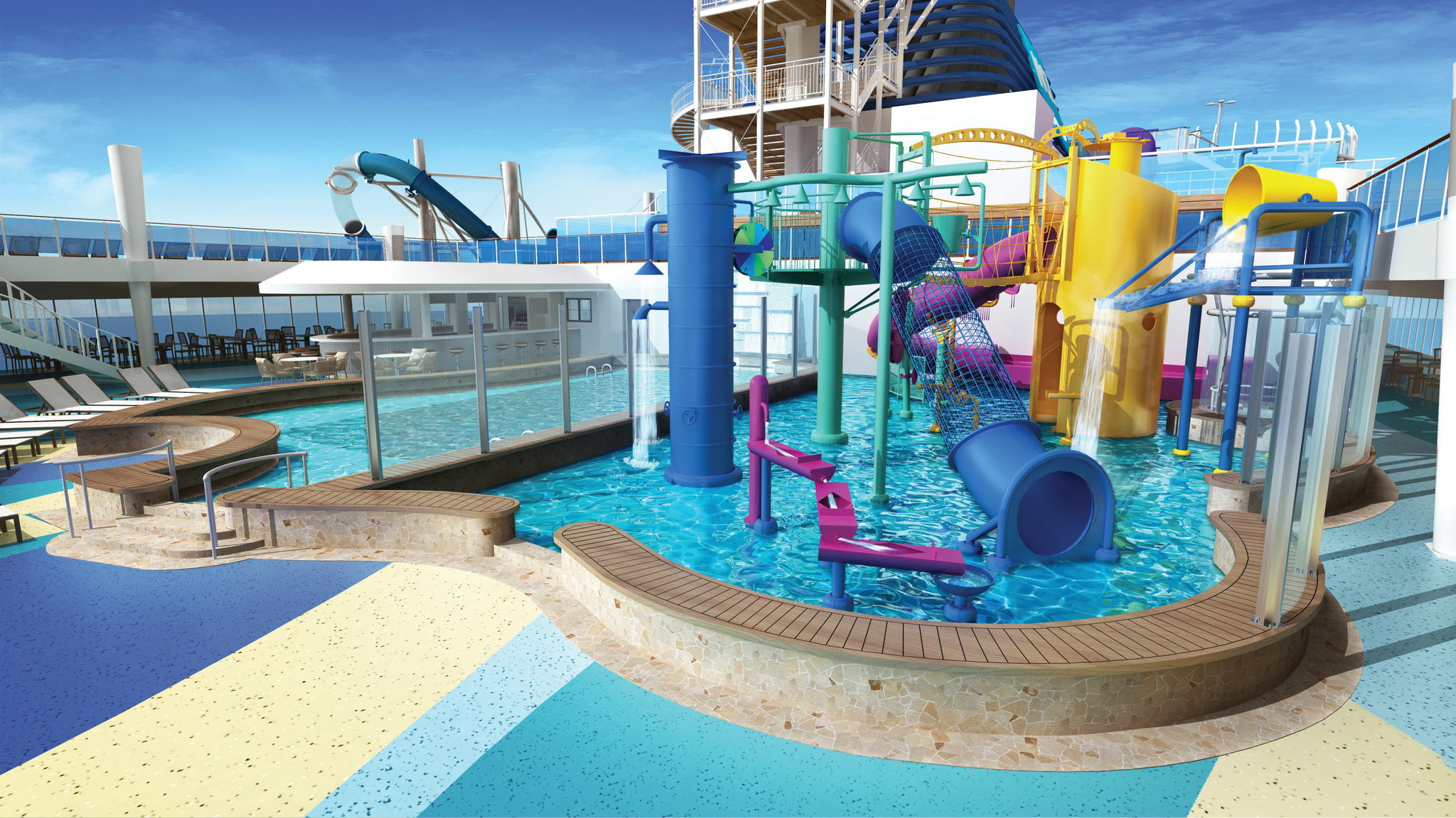 New dining will include Q, an a la carte Texas smokehouse restaurant where guests can choose from a selection of brisket, ribs, chicken, sausage and more that will be freshly smoked over hickory, oak and pecan woods. The eatery will also feature live contemporary pop country music. The new A-List Bar — named for Stuart — will serve cocktails, wine and premium spirits.

Signature beverages from Seattle and its surrounding region will be easy to find onboard Bliss: The ship will have the line’s first full-service Starbucks, and The District Brew House will serve 24 beers on tap and more than 50 bottled beers, along with bites from the adjacent Food Republic. Craft beer will come from Red Hook Brewery and Elysian Brewery in Seattle, as well as from Wynwood Brewery and M.I.A. Beer Company in Miami (a bow to later Caribbean itineraries). The Cellars, A Michael Mondavi Family Wine Bar, will have a wine list that includes 35 grape varietals that encompass top selections from Washington-area vineyards; Tuscany, Italy; and Michael Mondavi’s own Napa Valley Estate.

The Local, a new complimentary, 24-hour dining concept, will offer guests pub fare in a relaxed atmosphere. Also new is Coco’s, where the scent of a chocolate fountain will summon passengers to its handmade pralines, truffles, crepes and other chocolatey pleasures paired with fine coffees and teas.

The indoor-outdoor Los Lobos, which made its debut in 2016 onboard Norwegian Dawn, will offer dishes from fresh guacamole prepared tableside to al pastor tacos and enchiladas de mole, along with margaritas featuring NCL’s own tequila blend.

Bliss will also feature both smoking and non-smoking casinos to cater to all guest preferences, and the lineup of entertainment will include Tony Award-winning musical “Jersey Boys.” The ship will have two observation lounges, including the exclusive Horizon Lounge (for guests of The Haven), which will have vantage points for whale watching in Alaska.

Stuart expects that the array of innovative features onboard Bliss will introduce the NCL brand to West Coast clients. A ship especially designed for Alaska was a big step, but Stuart notes that Alaska sailings are heavily North American-sourced.

“At the moment, we feel the North American market is very strong,” he said. “Consumer confidence is up, and our guests are planning their vacations further out than they have in past years. Alaska sailings are typically stronger sourced from the West Coast, where as a brand we have tended to be stronger in East coast sourcing. We felt that bringing Bliss to the West Coast would give us an opportunity to bring a strong, exciting product to an audience who may not be as familiar with our brand. New ships are a great opportunity to get those who are new to cruising or new to your brand interested in sailing with you — someone who is wowed by the idea of a race track on a cruise ship will be drawn in to learn more about the brand, and ultimately the destination will drive their purchasing decision.”