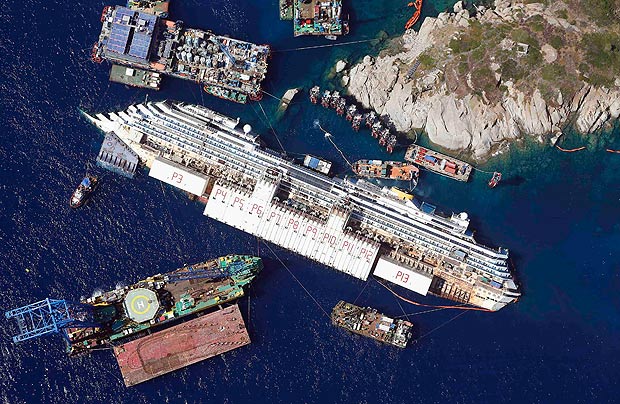 A huge convoy moving at a speed of two knots is taking the Costa Concordia on its final voyage to the scrapheap today two-and-a-half years after it struck rocks and capsized, killing 32 people.

Fourteen boats, including three UK flagged boats, the Garibaldi, the Afon and the Earl Vow, are accompanying the liner, as well as a helicopter and a military plane that has circled continuously overhead.

As well as two powerful tugs in front, there are two spare tugboats behind, in case the boat needs to reverse in the face of an obstacle.

Fast outriding speed boats are warning sea traffic ahead to move aside, giving the Concordia at least 1.5 miles of space around it.

One vessel is tasked with checking for any marine mammals in the region, while others check the water quality for comparison before and after the passage.

Scroll down for video

Final voyage: The wreck of the Costa Concordia is towed by two tugboats as it leaves behind the tiny Tuscan island of Isola del Giglio, Italy

The Costa Concordia cruise liner has begun its final voyage away from the tiny Italian island where it capsized on January 13, 2012

Setting off: The cruise ship Costa Concordia is towed by tugs from Giglio after being refloated. The ship is bound for it’s home port of Genoa

Another boat accommodates the technicians when they are not working. A group of 12 are on a control room on the boat but switch with another workgroup every 12 hours.

As it was tugged along like a floating multi-storey carpark, the far side of the wrecked ship could be seen for the first time since it was hoisted out of the water last week.

Entire decks newly emerged from the brine are covered in rust while others have collapsed in the decay. The nearside is blighted by a huge hole where the ship hit rocks two years ago.

Maneouvres began early this morning to remove the cruise liner’s rusty hulk from the Italian island of Giglio where the disaster happened.

The vessels, led by the tug boat Blizzard, then started to tow the Concordia to a port near Genoa in northern Italy where it is due to arrive on Sunday, before being broken up for scrap.

On Giglio there was a carnival-like atmosphere as half the island turned out to pay homage to the ship. The church bells rang out and villagers and tourists cheered in unison as salvage workers came off shift for the last time.

A gang of six divers and welders from Titan, the US-led salvage company, sprayed champagne and lit cigars while posing for selfies in their hard hats and onesies.

‘Make sure you get the Costa Concordia in the background cause we f***ing did it!’, one yelled.

But on Corsica environmental campaigners have warned of the risk of a ‘maritime Chernobyl’.

The final voyage of the Costa Concordia caught on heli cam

The heavy tug boat Blizzard (left) moves into position to maneuver the re-floated wreck of the Costa Concordia cruise liner from its position off the coast of Giglio. The operation to get it moving again began today

Homeward bound: After more than two years since it slammed into a reef along the coastline of Isola del Giglio the wreck has begun its last journey, to the Italian port of Genoa, where it will be scrapped

People watch as the wrecked cruise ship Costa Concordia is towed by tugs from Giglio after being refloated. The ship is bound for it’s home port of Genoa

The ship will take a route out of the port towards the east, before heading north at a rate of two knots, or nautical miles per hour, to Genoa

They have grave concerns that the ship could split as it leaves port or during the four day voyage north, spilling a toxic brew of hydro carbons, chemicals and waste into the sea.

Its final passage will take it through a marine sanctuary home to rare whales and dolphins nursing their young.

Franklin Fitzgerald, from Houston, said: ‘We’ve been here for two years. There’s been lots of long long days. It’s been blood sweat and tears. But it was the best job ever, it won’t repeat itself.’

‘The island was the best bit of the job, one claimed, while another shouted, ‘the women and the beer.

The once-gleaming white luxury liner sank off the holiday island of Giglio in January 2012 after sailing too close to shore. Its wreck has remained there ever since as engineers embarked on one of the largest maritime salvage operations in history.

Over the past week, salvagers have slowly lifted the 114,500-tonne ship from underwater platforms by pumping air into 30 large metal boxes, or sponsons, attached to the hull.

This morning salvage workers lowered the ‘Blue Peter’ flag, which they had raised yesterday to announce that the ship was ready to depart.

Salvage master Nick Sloane who is overseeing the entire operation said: ‘Traditionally the flag tells the sailors its time to get out of the bar.’

As he arrived for his most important day in the job so far, he said: ‘Everything is going to plan and it’s a big day for Giglio but we can only relax once we get to Genoa.’

Although I’m loath to admit it, numbers can tell a story just as effectively as words sometimes. Or images.

We all know that a picture is worth a thousand words. So when it comes to the Costa Concordia, the image of the ship being towed to Genoa, Italy, next week will go further than any number of words in showing that the ship is at last floating again and on its way to oblivion.

More intriguing are the numbers. In a graphic compiled by CNN from numbers released by the Costa Concordia’s builder, Fincantieri, and the salvage consortium Titan Micoperi, some numbers are juxtaposed, making for several eye-opening stories.

First are the dollars. Costa CEO Michael Thamm said this week the meter on the Concordia accident has reached 1.5 billion euros, including the cost of demolition and recycling over the next two years. That’s about $2.04 billion at current exchange rates.

According to the CNN graphic, the Concordia took about $612 million to build. By that math, recovering the wrecked Concordia cost more than three times the price of building the new Concordia. Somewhere there’s a lesson there about an ounce of prevention being worth a pound of cure.

Likewise, the numbers show it took about 20 months to build the 114,000-ton ship at Fincantieri back in 2004, but will take about 54 months, or four-and-a-half years from the time of the accident, to remove and unbuild it.

The graphic shows a loss of 12,000 tourists since the accident in the island of Giglio, but I think that’s misleading. Most of the tourists lost were likely Italians or Europeans from other nearby countries.

The Concordia accident, for better or worse, made Giglio nearly a household name in countries around the world that never heard of it before. I think over the long term it may lead to more tourism, despite the short-term losses.

Another story told through numbers appears dramatic but again is misleading. Of the 500 people who worked on the salvage team, fewer than 12 were locals, according to the graphic.

I have no idea how that count was made, or if it is accurate, but I do know that salvage work of the magnitude involved in raising the Concordia requires world-class expertise, and is not the kind of thing where local hiring outreach makes a lot of sense.

Another set of numbers is also about people: 3,200 passengers, 32 killed, one missing. With that there can be no argument.