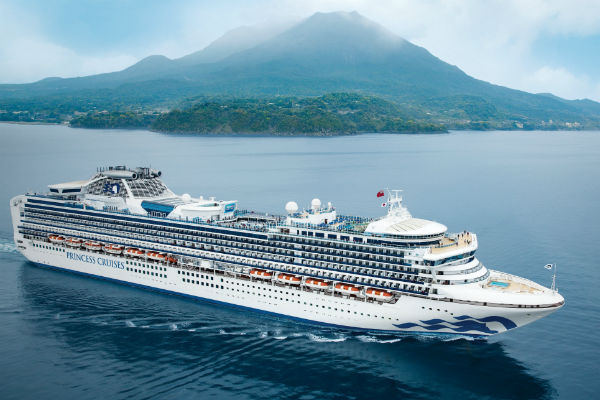 Carnival Corporation boss Arnold Donald has refuted suggestions the cruise industry was “slow” to react to the outbreak of coronavirus.

He argued that cruise is actually one of the best-placed sectors of travel to cope with anticipated stricter health and safety protocols in the future.

The chief executive of the nine-brand cruising giant said: “The cruise industry put a pause on the cruise before anybody else did. Before hotels or restaurants and other places of social gathering.

“Cruise ships are not the cause. Neither are they the reason for the spread.”

Commenting on the outbreak onboard Diamond Princess which was held in quarantine off Yokohama by Japanese authorities, Donald said: “This was an evolving situation. There was very little knowledge early on, in February and early March.

“But we did exactly what we were told to do. We co-operated fully with the Japanese Ministry of Health. They decided to hold the ship and put a quarantine in place, so we complied with that and at the same time, we tried to make it as comfortable as possible for our passengers and crew.”

And he added: “If you listen to our guests on Diamond or Grand Princess, you’ll hear lots of plaudits for our crew and our corporation. Our guests feel strongly that we did our best.”

Asked if he blamed authorities of the destinations and ports that wouldn’t allow ships with confirmed cased of Covid-19 to disembark passengers, Donald said: “I won’t sit and judge anybody at the moment. We all need to focus on helping.

“There were certain situations where we had ships with people on board that needed medical attention – not even Covid-19 related – that couldn’t get it in a timely manner they would have normally. That was unfortunate. There’s no question that happened and we tried to give assistance where we could. But I will not judge.”

Donald concluded: “So people say we were slow, but we were first [to suspend operations] – before all the other social gathering venues.”

And he added that cruise was well-placed for the future when stricter health and safety protocols are expected to be introduced across the travel industry.

“I don’t think there’s anything unique to this that particularly ascribable to cruise alone. In fact, in many ways, a cruise is better set up to handle this than society in general,” said Donald.

“We already do isolation, deep cleaning, hold medical records, do temperature scanning, use hand sanitizers and promote regular hand-washing. We also document a lot of passenger information. So we’re uniquely suited in some ways.

But he added: “Covid-19 has its own epidemiology. Whatever the medical experts deem is necessary to deal with it in the future, we will cooperate and implement.”

A new CDC (Centers for Disease Control and Prevent) report recommends that travellers “defer all cruise travel worldwide” due to increased risk for coronavirus. The report is available here.

During the initial stages of the coronavirus, the Diamond Princess was the setting of the largest outbreak outside mainland China, according to the CDC.

“Cruise ships are often settings for outbreaks of infectious diseases because of their closed environment and contact between travellers from many countries,” said the CDC. “More than 800 cases of laboratory-confirmed COVID-19 cases occurred during outbreaks on three cruise ship voyages, and cases linked to several additional cruises have been reported across the United States. Transmission occurred across multiple voyages from ship to ship by crew members; both crew members and passengers were affected; 10 deaths associated with cruise ships have been reported to date.”

The report is available here.

March 13 (Reuters) – Royal Caribbean Cruises Ltd said on Friday it was suspending its cruises in the United States for 30 days, an hour after Norwegian Cruise Line Holdings Ltd said it suspended all its cruise voyages through April 11.

Costa Cruises accounted for 15% of Carnival’s overall capacity as of Nov. 30, offering voyages in Asia and Europe, including the Mediterranean.

The Princess Cruises unit has been in the spotlight after its Diamond Princess and Grand Princess ships were quarantined after they became hotbeds for coronavirus infections.

Norwegian, however, said no confirmed case of the virus was reported across its 28 ships.

The outbreak, described by the World Health Organization as a pandemic, has infected thousands in the Mediterranean countries such as Italy, where it has claimed more than 1,000 lives.

Carnival said it was checking if their guests are aged over 70 years and would deny entry to people with chronic or severe medical conditions.

Separately, credit rating agency S&P Global said it lowered the credit ratings on Carnival and its unsecured debt to ‘BBB’ from ‘A-‘, on expectations of a significant loss in revenue and cash flow in 2020.

Stocks of cruise operators are among the worst hit, with Carnival, Norwegian and Royal Caribbean down between 66% and 81% this year through Friday’s close. (Reporting by Praveen Paramasivam in Bengaluru; Editing by Sriraj Kalluvila and Krishna Chandra Eluri)