Another year, another non-recession.

How long can this go on?

It has been a decade since the so-called Great Recession bottomed out in June 2009. Since then the U.S. economy has experienced a remarkable 125 months of uninterrupted growth, breaking the 120-month record set by the 1991-2001 expansion.

Ten years of steady climbing has had a predictable effect on cruise sales. According to executives of Royal Caribbean Cruises Ltd. and Norwegian Cruise Line Holdings, which recently reported third-quarter results, things couldn’t be better.

“I can’t stress enough the underlying strength of the business,” Frank Del Rio, CEO of NCLH said in a conference call with analysts.

Despite doing nothing strategically to extend the booking window, it expanded by 10% in the third quarter, Del Rio said, “underscoring consumers’ underlying appetite for cruising on our three brands.”

Cruise lines are at that happy point where, at least in North America, an abundance of bookings is creating scarcity, driving prices higher, and stampeding more consumers to book even earlier to lock-in early booking savings.

All good things come to an end, to be sure, but the chances of them coming to an end in 2020 aren’t that likely.

In its monthly survey of economists for November, the Wall Street Journal found that only 34.2% of economists expect the expansion to end in 2020, with another 29.3% saying it will end in 2021.

One of the main drivers of a classic recession, inflation, is expected to clock in at 1.9% in November, just below the Federal Reserve’s target. The unemployment rate next month is forecast at 3.6%, meaning most of the people who want a job have one, providing fuel for further consumer spending.

Economists used to talk about the Goldilocks economy – not too hot, not too cold – and without much fanfare, we may be in one. But one troubling footnote is that the growth in the current expansion – 25% since 2009 – has been only half as strong as the 42.6% growth in the 1991-2001 period.

Fain said that expansions don’t die of old age; there has to be a trigger, which right now isn’t blindingly obvious to most observers. He said that when the recession does come, the cruise industry will do okay.

He recalled that the Oasis of the Seas, then the biggest cruise ship in the world with a startling capacity for 5,400 guests, was delivered in 2009 when the economy was flat on its back.

“The truth is it did beautifully even in 2009. Oasis was gangbusters, and it was because it met a need,” Fain said.
He added that it was important that Royal Caribbean’s cost-cutting during the last recession didn’t cut from the guest-facing functions.

“Lots of businesses say ‘Oh business is bad, we’re not selling so many shoes, so we’ll cut costs and lay off some people.’ If we fill our ships, we can’t let one customer feel like we’ve cut back in order to make our earnings look better,” Fain said.

“We’re going to continue to function, continue to operate, continue to market because it’s the right thing to do to be in business five years from now,” Fain added. “And everybody in this room will remember what we do.”

As cruise competitors seek the attention of new and returning clientele, the trend for lines to offer the best in deck attractions, fine dining and world-class entertainment continues. New and ever-grander ships are on the horizon, but brands are updating their existing vessels to have all the latest that clients expect, as well.

In short: The differences between older and newer ships are becoming imperceptible.

Here, we take a look at two companies updating their ageing vessels — Carnival Corporation & Plc, and Royal Caribbean International — and what clients can anticipate on future cruise vacations.

Caribbean Princess, from Carnival brand Princess Cruises, recently went all out to update its kid-friendly pool deck with the new Reef Splash Zone. Central to the waterpark is Splashpad, featuring Winnie the Whale, an “Animal Planet” focus of the Camp Discovery Youth & Teen Centers onboard. The whale playfully emits water from its fluke and spout among other interactive sprays, showers and a splash pool. There are other whale murals for more “Instagrammable” moments, as well as a family game zone with oversize backyard-style games. 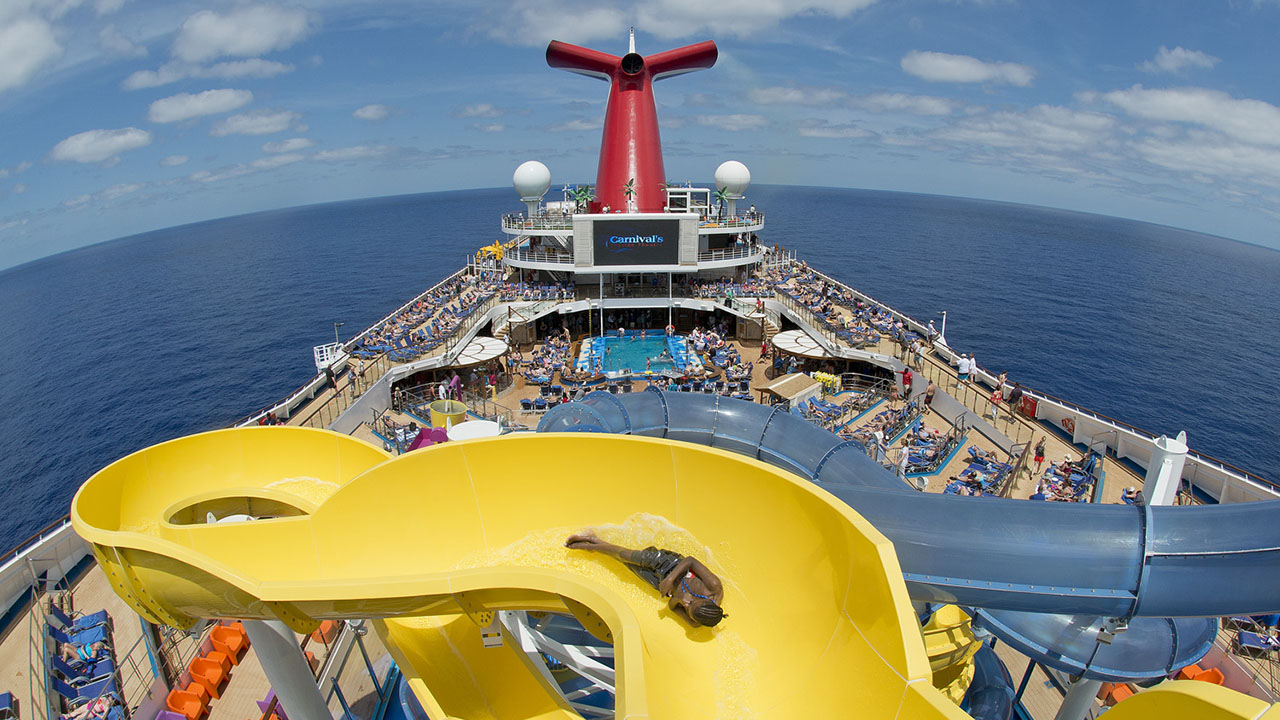 Carnival Sunrise will feature new amenities such as a waterpark, waterslides, a children’s splash zone and a SportSquare.

Carnival Sunrise will feature new amenities such as a waterpark, waterslides, a children’s splash zone and a SportSquare.

The surrounding pool, whirlpool and bar area has also been refreshed. Morgan’s Bar serves mocktails with names such as Crazy Coconut and Berry Nice to Meet You that guests can enjoy while lounging on plush sectionals. And just a deck below, the outdoor portion of Camp Discovery showcases a destination-themed water table that is educational and illustrates itinerary spots such as Sydney Opera House in Australia, San Francisco’s Golden Gate Bridge and the Panama Canal.

Like Caribbean Princess, Sunrise newly touts a children’s splash zone, a waterpark and waterslides. There’s also a SportSquare with a ropes course and minigolf, as well as a Serenity adults-only retreat. Camp Ocean, Circle “C” and Club O2 are dedicated to kids, teens and tweens, respectively.

Enhanced entertainment onboard Sunrise includes The Punchliner Comedy Club, hosted in the new Limelight Lounge; Playlist Productions in Liquid Lounge; and other live music and parties. The shipboard shops, photo gallery, spa and fitness centre have also been updated.

With the success of its latest vessels, Harmony of the Seas and Symphony of the Seas, Royal Caribbean is now eyeing its Oasis-class vessels for dramatic enhancements. Oasis of the Seas and Allure of the Seas will soon share even more with their younger sister ships for greater consistency across the fleet while still showcasing some individuality. 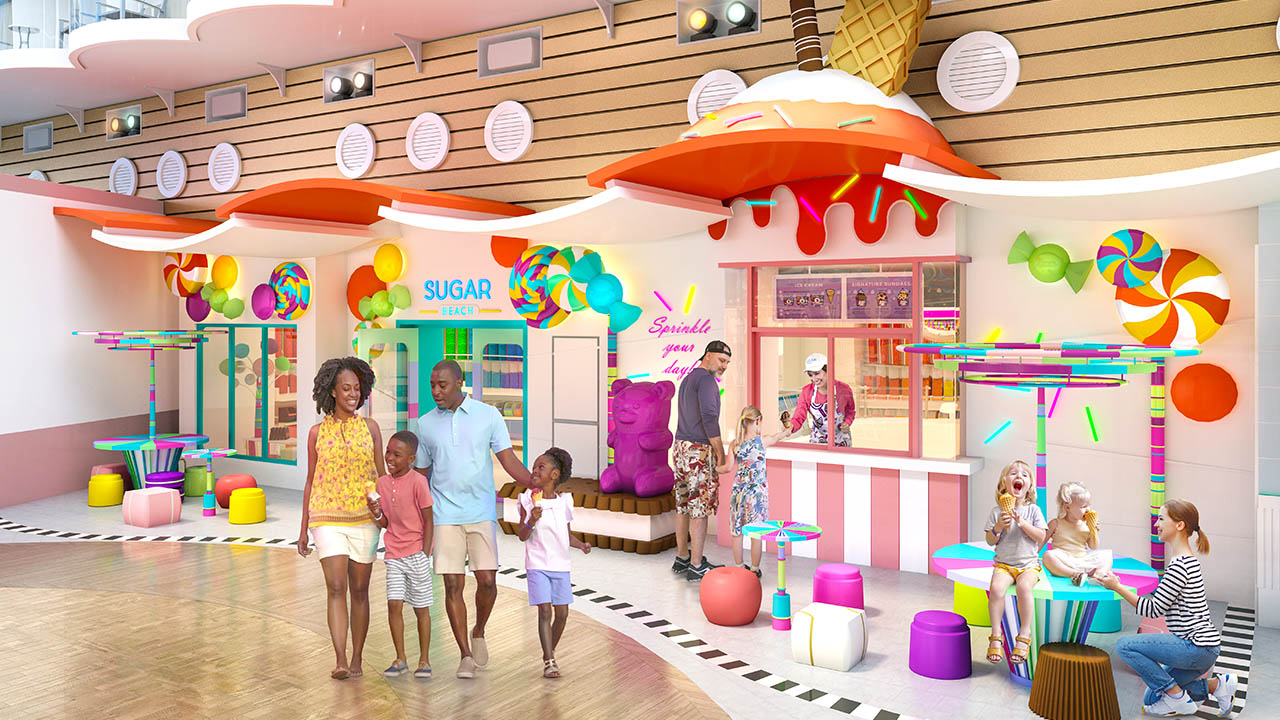 Oasis and Allure will feature the colourful candy and ice-cream shop Sugar Beach.

In time for its 10-year anniversary, Oasis will relaunch this November after an extensive two-month refurbishment. Leading its new onboard features will be a redesigned Pool and Sports Zone complete with a Splashaway Bay children’s waterpark; The Perfect Storm trio of waterslides; and the famed Ultimate Abyss dry slide. Splashaway itself will feature three waterslides for kids, plus two drench buckets, water cannons, fountains and pools. Across the board, all youth clubs will be redesigned, as well.

The pool deck will add The Lime and Coconut bar, and El Loco Fresh for Mexican cuisine will be located near the pool. Other additions will include Playmakers Sports Bar & Arcade for pub food and Sugar Beach for candy and ice cream along the Boardwalk. Also, for the first time, Portside BBQ will be a poolside barbecue restaurant serving savoury meats.

Combining a bar scene and entertainment will be Bionic Bar, where robotic bartenders will show off their drink-making skills. Other new entertainment options will include Spotlight Karaoke on the Royal Promenade, and the energetic live Music Hall will be introduced to the Oasis-class from the Quantum class. What’s more, there will be a Clash for the Crystal City laser tag game and Royal Escape Room – Mission Control: Apollo 18.

Meanwhile, Allure will mostly mirror the updates of Oasis when it comes back online in May 2020 following its own two-month revitalization.

It, too, will receive Splashaway Bay; the Ultimate Abyss dry slide; and the Typhoon, Cyclone and Supercell waterslides. The Lime and Coconut, Portside BBQ, Playmakers Sports Bar & Arcade, El Loco Fresh, Sugar Beach and Bionic Bar are also on the menu, as are Music Hall and Spotlight Karaoke. But fresh to only Allure will be Giovanni’s Italian Kitchen & Wine Bar, which will combine the existing Giovanni’s Table restaurant and Vintages bar into one.

Voyager of the Seas — the original model for the larger Oasis class — is also part of the line’s Royal Amplified fleet enhancement program. The ship is set to emerge from a refurbishment before the others in October. It will tout two of the three Perfect Storm waterslides (Typhoon and Cyclone); a refreshed Solarium; a redesigned Vitality Spa; and updated areas for babies, kids and teens. The vessel will also feature Battle for Planet Z laser tag, as well as 72 new inside and balcony staterooms, plus a Suite Lounge and Diamond Lounge.

Lastly, Royal Caribbean recently announced that it will remodel a Freedom-class ship (sized between Voyager and Oasis classes). Like Voyager, Freedom of the Seas will reemerge in March 2020 with redesigned children’s facilities and The Perfect Storm duo of waterslides, plus the Clash for the Crystal City laser tag game; a Playmakers Sports Bar & Arcade; Giovanni’s Italian Kitchen; Izumi Hibachi & Sushi; and a retooled pool deck showcasing Splashaway Bay, El Loco Fresh and The Lime and Coconut.

A sixth Oasis class mega cruise ship is due to be delivered to Royal Caribbean International in autumn 2023.

Parent company Royal Caribbean Cruises Ltd yesterday revealed that it has entered into an agreement with French shipbuilder Chantiers de l’Atlantique to order the latest in the family of giant vessels.

The ships, reputed to cost more than $1 billion each to build, are capable of carrying 6,680 passengers.

The Oasis class ships made their debut a decade ago with Oasis of the Seas followed by Allure of the Seas.

The line’s fifth Oasis-class ship is due for delivery in spring 2021.

The new order is contingent upon financing, which is expected to be completed in the second or third quarter of this year, according to the company.

RCCL chairman and CEO Richard Fain said: “It is such a pleasure to announce the order of another Oasis-class ship.

“This order is a reflection of the exceptional performance of this vessel class and the extraordinary partnership between Chantiers de l’Atlantique and Royal Caribbean Cruises Ltd.”

The French shipyard’s general manager Laurent Castaing added: ”This is the 23rd cruise ship that Royal Caribbean will be building at our shipyard, and we are especially proud of it.

“The order reflects the confidence our customer puts on us, based on the exceptional quality of our long-term co-operation between the two companies and on our capacity to bring innovative solutions to meet our customer’s expectations.”

RCCL brands operate a combined total of 60 ships with an additional 16 on order.