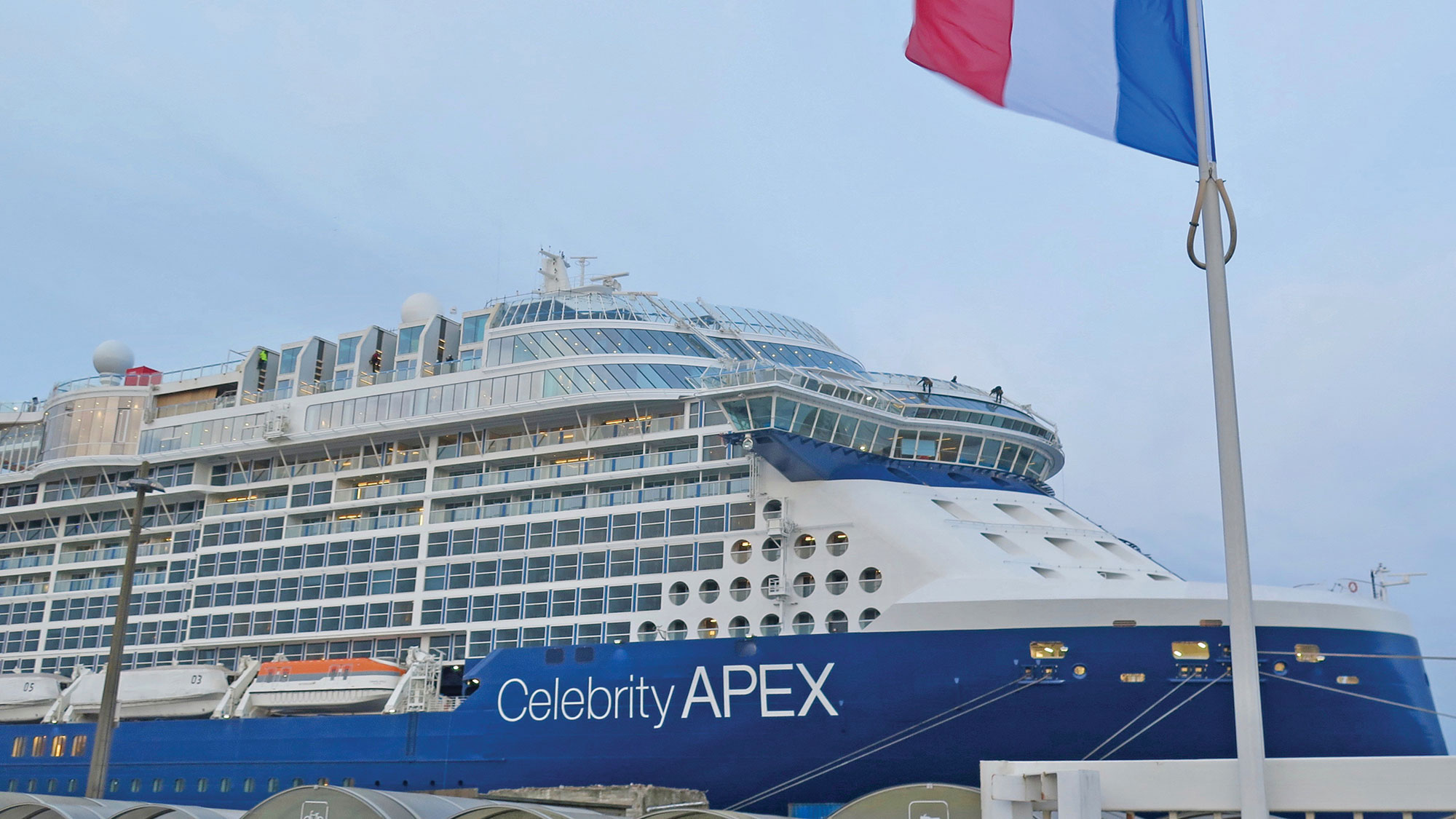 Celebrity Edge first floated in 2018, has been a wildly successful ship, according to Vicky Garcia, COO and co-owner of Cruise Planners. But, for this second in the series, Celebrity didn’t rest on its Edge laurels.

“They tweaked things to be even better and different,” Garcia said during a walk-through of Celebrity Apex, which is scheduled to debut in Europe in March.

Celebrity president and CEO Lisa Lutoff-Perlo said that as the company builds ships, “We make a lot of changes along the way. We do it because we want it perfect.”

The biggest changes with Apex, she said, involve the entertainment.

Three new stage shows are set for The Theatre, along with new technology such as towering LED screens that curve around the stage to make the performances more immersive and exciting.

The new productions include “Crystalize,” Which Celebrity’s new vice president for entertainment Lisa Lehr called “our eye-candy tech show.” It employs lasers, video, aerial acrobats and an underwater ballet sequence made possible by one of those new tech marvels: a towering scrim with eight 20K laser projectors that create a 360-degree, wraparound picture for the audience. 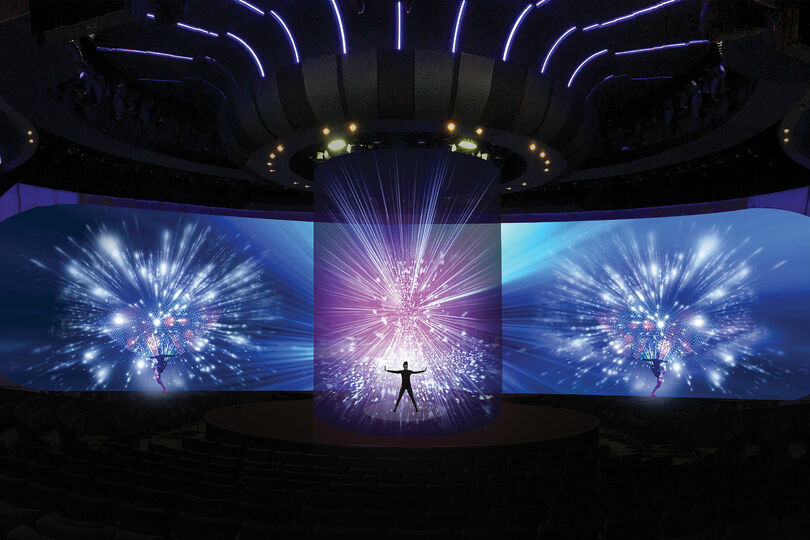 “Rockumentary” stars classic rock moments from Wembley Stadium to Woodstock. In a twist, audiences get to decide the finale by voting in advance using the Celebrity app.

Meanwhile, Eden, the triple-deck, glass-walled lounge in the aft of the ship, will have a theme that changes daily, with daytime activities that are carried through in the nighttime entertainment. For example, a daytime guided meditation will be followed by a “Night of Chill” ultra-lounge concept with acoustic music.

Another day, interactive art experiences will lead into “Night of the Arts,” with interactive performances.

“Eden is beautiful, one of the most stunning spaces I’ve seen on a ship,” said Tawnee Sons, a Cruise Planners agent. When Edge came out, Eden had a “unique, artsy concept” that enthralled some but put off others, she said. Sons think the revamped programming there should appeal to a wider range of people.

The ship’s nightclub, The Club, will provide more intimate, cabaret-style entertainment such as new takes on classic circus acts with aerial acrobatics. During the day, The Club will host all kinds of activities, from live-band karaoke to archery and dance classes.

When it comes to dining changes, new and expanded menu offerings are planned in many Apex venues.

Cornelius Gallagher, vice president of food and beverage at Celebrity created fresh signature dishes for each of the four main dinings rooms: Cosmopolitan (new American with international influences), Cyprus (Mediterranean), Normandie (French) and Tuscan (Italian). An enlarged galley enables expanded offerings in Raw on 5 and the Magic Carpet, the movable, a cantilevered platform that is the hallmark of the Edge series 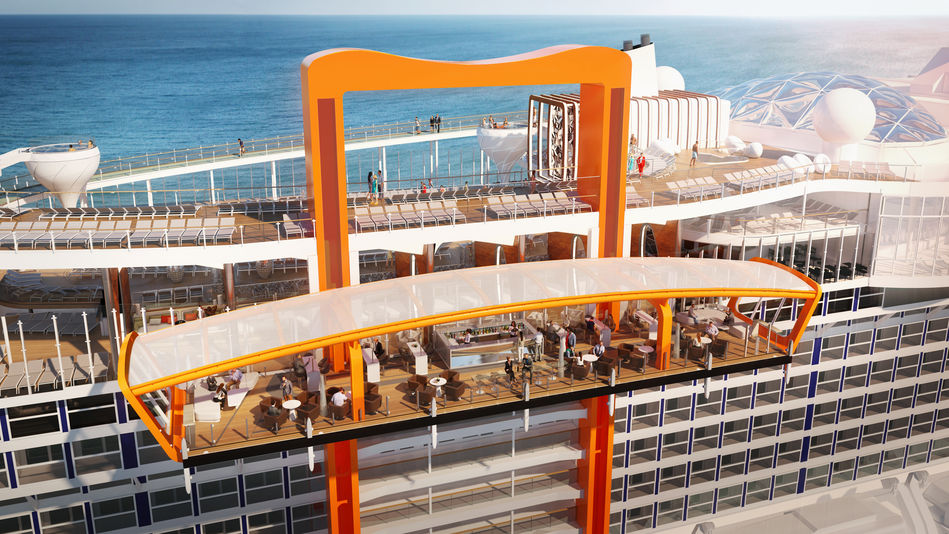 The Fine Cut Steakhouse, which Gallagher said is Edge’s busiest speciality dining venue, will be getting upgraded proteins. And items will be added at the Rooftop Garden Grill, as well. (There, additional canopy coverings and screens will calm the wind.)

Gallagher also revamped the Eden menu, with an emphasis on flavour and local sourcing. For example, when the ship is in Spain, one dish could be fresh-caught, blazing-red carabiniero jumbo prawns.

A new storyline for Le Petit Chef, the 3-D digital animation in Le Grand Bistro, is also coming. Plus, Celebrity Apex will be adding the Craft Social Bar, which debuted on Celebrity Equinox. This casual spot offers draft cocktails, wines on tap and more than 50 craft beers served by a cicerone (a certified beer sommelier). Celebrity-style comfort food will be available  —  think mac and brie or Kobe beef sliders.

When it comes to the spa, a new collaboration with OneSpaWorld is creating broader wellness programming. Apex will offer F45 training, popularized by the actor Mark Wahlberg. The 45-minute sessions involve cardiovascular, strength and interval training.

A new Women in Wellness program will highlight practices by noted influencers like Katie Brauer, yoga master and founder and CEO of The Yoga Professional, and Ruth Zukerman, co-founder of Soul Cycle and Flywheel Sports.

Local ingredients from visited destinations will be incorporated into a new Destination Wellness program.

“Edge is a beautiful ship, but when you create something new, you can have these little adjustments that elevate it to the next level,” she said. “Celebrity has done that with Apex.”

The pre-launch hype was almost unprecedented – generating excitement and anticipation without actually revealing anything about what was to come. It could have been a gigantic anti-climax, but the long-awaited reveal of Celebrity Edge surpassed all expectations.

The design of this next-generation cruise ship is truly transformational – the word preferred by Celebrity president and CEO Lisa Litoff-Perlo and her boss, Royal Caribbean’s Richard Fain.

Design ambassador Nate Berkus, who presented yesterday’s event in Miami and stole some of the thunder from British designers Kelly Hoppen and Tom Wright, called it revolutionary, and few would argue.

The vessel, built to carry around 3,000 passengers, turns traditional shipbuilding concepts inside out, allowing for virtual balcony staterooms that simultaneously open up the connection with the sea while creating extra space for living and sleeping.

Even more spectacular is the Magic Carpet, inspired by the magician that is Richard Fain – who has already been behind innovations such as the Central Park on Royal Caribbean’s Oasis-class ships, the NorthStar observation pod on the Quantum class, and the living lawn on Celebrity’s Solstice class.

What began as his demand to improve the process of getting passengers into tenders to be carried ashore has developed into an unprecedented 90-ton construction – the size of a tennis court – that rises from Deck 2 to Deck 17 and will also be used as a bar and a restaurant.

Edge, the first of four ships in the class, is being built in France and will make her maiden voyage in December 2018. Celebrity Beyond follows in 2020, and the other two arrive in 2021 and 2022.

There will be a total of  1,467 staterooms, with 176 of them designated as suites. For the first time on a Celebrity ship there will be designated accommodation for solo travellers. There were to have been eight single cabins but the number was doubled last week at Fain’s insistence.

Hoppen has been involved in creating much of the look of the ship’s interior, from cabins to the exclusive Retreat area for suite guests, and even the public toilets aboard the ship.

Architect Tom Wright, who was responsible for the Burj al Arab and the Jumeirah Beach resort complex in Dubai, worked on the Magic Carpet and also created the Solarium and the Rooftop Garden.

Edge’s pool deck has been re-named Resort Deck, and most of the sunloungers are placed to look out to sea rather than inwards to the pool. Instead of the usual jogging track one deck above the pool, Edge has a sweeping quarter-mile figure-of-eight track that swoops between two levels.

Two hot tubs rise above the pool in constructions that look like a cross between a tulip and a martini glass. Truly spectacular.

Edge borrows from, or perhaps improves upon, the top-of-the-range suite on Regent Seven Seas Explorer – dubbed the world’s most luxurious cruise ship – by having two vast forward-facing suites immediately above the bridge.

Fain has booked one for his own family’s Christmas holiday in 2018, but Lutoff-Perlo had a twinkle in her eye when she announced that the twin suite had been booked and sold within minutes of Edge’s Caribbean cruises going on sale yesterday.

Celebrity is working on a smartphone app that they say will replicate the medallion technology announced earlier this year by Princess Cruises – allowing remote-control ordering of drinks and unlocking cabin doors without the need for a keycard.

Other innovations include facial-recognition technology that lets passengers check in without having to queue at a desk.

Fain claims that many of the design innovations on Edge are the result of using 3D computer technology instead of having everything drawn in 2D blueprints.

He is too modest. The technology might be an invaluable tool, but it cannot create. That’s down to his inspiration and the skills of Hoppen, Wright, and a whole team of Celebrity innovators … all working close to the Edge.