MSC’s Ocean Cay is set to welcome guests later this year to its private island experience in the Bahamas, with the cruise line releasing new details today.

Among the features are eight beaches; Seakers Family Cove, a shallow lagoon to play in with a beach for games, monitored by lifeguards; Seakers food court, which will be complimentary for guests; the Spa at Ocean Cay; various evening entertainment including a light show around the 98 ft. lighthouse at the centre of the island, a traditional Junkanoo parade — Bahamian festival and consisting of a feast of colourful costumes, music and dancing.; and shore excursions including stand-up paddle boarding, kayaking, snorkelling and stargazing in the evenings.

“The vision for the island is to immerse guests in the natural beauty of their surroundings in the Bahamas. Ocean Cay is founded on a deep commitment to ecological principles – beliefs that shape everything from how venues are built and how the island is run, to the kinds of activities featured on the island. Work is underway to design opportunities for guests to learn about the protection of the oceans and the importance of preserving coral reefs through dedicated edutainment programs,” MSC said, in a prepared statement.

As part of the development of Ocean Cay, MSC said it is working to establish the roadmap for the restoration of marine resources, including habitats and species present in the area. This will include the restoration of endangered corals and the implementation of other conservation and educational programs.

The island is situated within protected waters spanning 64 square miles, but the ambition is to further extend this parameter to ensure an even greater impact, MSC said.

MSC also said it had commissioned a Rapid Ecological Assessment (REA) that provided a short term overview of the waters around Ocean Cay.

“An integral part of the marine ecosystem, coral needs to be protected as they maintain biodiversity, provide a habitat for marine life and protect coastlines,” the company said. “Now that the waters around the island are protected and it is no longer an industrial site once used for sand excavation, the seabed is returning to normal. The hope is that the coral will again begin to thrive. Plans are underway to establish a coral nursery on the East side of the island with the goal of propagating even more coral, particularly the more endangered varieties.”

The recent survey established that there are three types of coral that can be found in abundance — primarily Agaricia agaricites known as lettuce coral; Porites astreoides commonly known as mustard hill coral or yellow porites; and Siderastrea also known as massive starlet coral. These species are more capable of withstanding harsh temperature conditions and siltation than other species. Also found around the island during the assessment is the critically endangered Acropora palmata known as Elkhorn Coral. Four distinct colonies of this species were observed along the rocky shoreline of these cays. Over time these corals will become candidates for restoration in the coral nursery.

The Ocean Cay team is already seeing an increase in marine life in the area, and the REA identified 88 different species of fish around the island as well as lobster, sea turtles and rays.

As per the terms of the agreement, which has today received approval from the Miami-Dade Board of County Commissioners, MSC Cruises will design, construct, operate and maintain a large building that hosts two cruise terminals (AA and AAA) as well as two berths.

The PortMiami terminals will be capable of hosting two mega cruise ships at the same time, allowing the MSC to conduct two turnaround operations simultaneously, handling up to 28,000 passenger movements per day.

Pierfrancesco Vago, MSC Cruises Executive Chairman, said: “With another 13 cruise vessels due to join our fleet in the next eight years, our ambition is to have our most innovative ship classes represented at PortMiami, bringing a wealth of choice to our North American as well as international guests.

“In particular, the new terminal – which will be one of the most innovative the industry has seen – will ensure that we can provide our guests an enhanced end-to-end high-quality experience while both embarking and disembarking, thus adding to their ability to fully enjoy every moment of their vacation.”

Work on the new terminals is due to commence in early 2020. MSC Cruises currently estimates that the work will be completed by late 2022, at which time it will transfer all its PortMiami operations to the new Terminal, according to a statement. 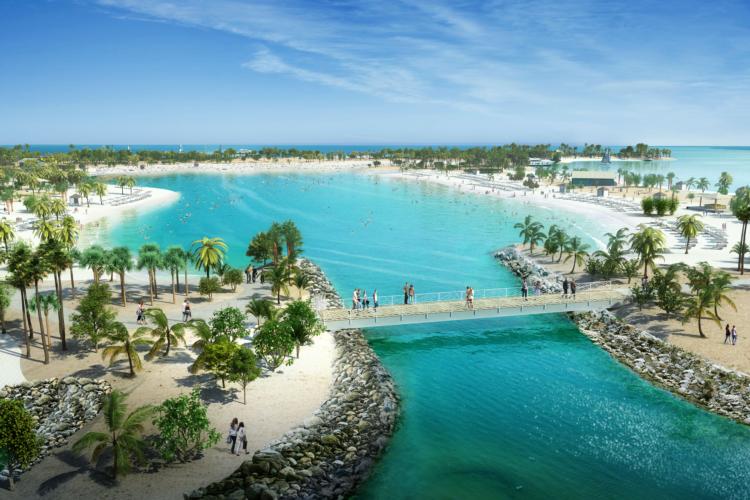 MSC Cruises’ new private island in the Caribbean will give guests a “ticket to paradise”, according to chief executive Gianni Onorato.

Ocean Cay, 20 miles off the coast of the Bahamas and 65 miles from Miami, will boast eight “pristine” beaches, seven reserved for different guests, such as families, Yacht Club or Aurea Spa passengers, and one for the crew.

There will also be a sunset beach, lagoon beach and main beach where all water sports and activities will take place. Water sports will include snorkelling to a shallow sunken shipwreck through to scuba diving.

Lectures on the coral life around the island and what MSC has done to clean up and preserve it will be offered, something Onorato felt would be popular with younger guests and children.

Every Caribbean itinerary from Miami, whether sailing to the Eastern or Western Caribbean, will call at Ocean Cay. Onorato said: “Because it’s so close to Miami, we can stay there until 1am so people can experience it at night and still be back in Miami for 6am the following morning.”

Guests will be able to watch movies under the stars with their feet in the sand.

Food will include a family buffet and a food cart going around the island, but the ship’s restaurants will remain open all day as many guests are expected to go back on board to eat. The furthest point of the island is a 17-minute walk from the ship and “completely flat”, Onorato said.

Deckchairs and some activities will be included in the cruise price, but cabanas, cocktails, island Wi-Fi, and certain sports like scuba diving will be extra. All will be bookable through package upgrades via the MSC app.

Onorato also revealed there would be a second private island, for groups of 30-40 people, that could be booked out exclusively for the day. He said this would be a perfect upsell for travel agents. Costs for this and other extras would be added to the website at the end of the month.

The island will have three shops; one selling Bahamian goods manned by locals, one selling Ocean Cay-branded merchandise and the other selling MSC items.

Onorato said it was his “dream” to open an island in the Mediterranean but explained that the only location it would be possible to have an island open year-round, off the North African coast, was currently out of bounds.

“We will have to wait, but it is my dream to open a private island in the Mediterranean at some point,” he said.