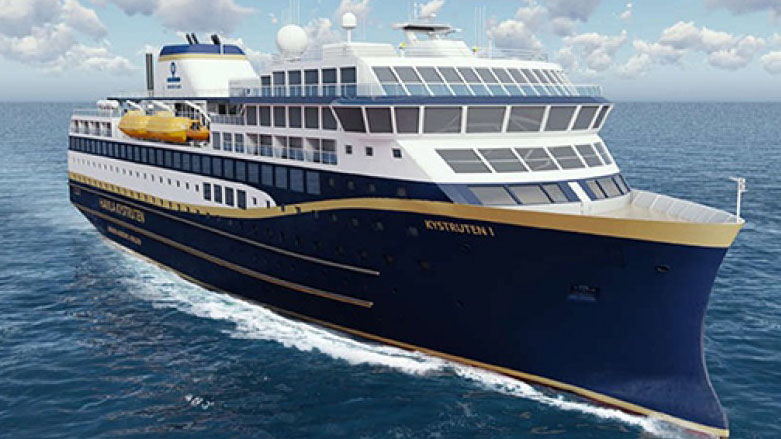 Havila Voyages is a new family-owned Norwegian shipping company which has ordered four ships, designed to be the most environmentally friendly to operate along the coastal route from Bergen to Kirkenes.

This will pitch the company in direct competition with long-established Hurtigruten.

The first two 179-cabin ships – Havila Castor and Havila Capella – will operate from next year with two more – Havila Polaris and Havila Pollux – following in 2022.

The ships are operating as part of a ten-year government-funded contract to sail the historic route, with Havila operating four of the 11 ships departing daily from Bergen.

Each of the new ships will be fitted with what are claimed to be the world’s largest battery packs, meaning they can sail through fjords and other vulnerable areas for up to four hours emission-free. The batteries will then be charged in the numerous ports along the route, using clean hydropower.

Newly-appointed UK country manager Matthew Valentine, who joins from Hurtigruten,  said: “2020 has not been an easy year for the travel industry, especially the cruise sector.

“We clearly didn’t plan to launch a new cruise line during a worldwide pandemic, so it is really heart-warming to have received such a positive response from the UK travel trade.

“We have some exciting plans for the launch of Havila Voyages and I’m delighted to once again be working with operators and agents from across the UK.

“We know that the success of our business will rely on us building strong trade partnerships, so I look forward to catching up with as many industry colleagues as possible in the near future.”

The 12-day Havila Voyage, costing from £829 per person cruise-only in December 2021, takes in 34 ports while passengers can choose to join the round trip, complete just the northern or southern journey or even spend two or three days on board.

Excursions offered to include a whale safari, king crab fishing in a frozen fjord, dog-sledging in the Arctic wilderness or snowmobiling across the North Cape Plateau.

Prices lead-in at £241pp for a two-day trip from Trondheim to Bergen,  cruise-only basis.

The six-day southbound voyage from Kirkenes to Bergen starts at £497pp.

A range of payment options is offered with cheaper, non-refundable rates or a choice of more flexible options.

Agents and tour operators will be able to make a booking via Havila’s B2B booking system once a contract is in place.

Norwegian Cruise Line Holdings has been honoured by the Women’s Forum of New York at the Breakfast of Corporate Champions in New York City, an event which recognizes the S&P 500/Fortune 1000 companies which have achieved 30 per cent or greater female representation on their corporate boards.

The event gathers more than 600 leaders and change-makers including CEOs, board directors and government officials in support of the shared goal of gender parity in the boardroom by 2025.

“Our board is committed to seeking out directors and management leadership with diverse backgrounds. We have actively recruited women and members of minority groups to where today our board is comprised of 30 per cent women and 60 per cent members with diverse backgrounds,” said Frank Del Rio, president and CEO of Norwegian Cruise Line Holdings, which operates the Norwegian Cruise Line, Oceania Cruises and Regent Seven Seas Cruises brands.

Two years ago, Norwegian Cruise Line appointed its first female director to its board: Stella David, former CEO of William Grant and Sons Limited. In 2018, retired U.S. Coast Guard rear admiral Mary Landry, and Pamela Thomas-Graham, founder and CEO of Dandelion Chandelier LLC were appointed as new directors to the company’s board.

“As an organization of top women leaders, the Women’s Forum of New York salutes the 2019 Corporate Champions which are raising the bar for female board representation by actively seeking more women directors,” said Janice Ellig, CEO of the Ellig Group and chair and founder of the Breakfast of Corporate Champions.

Stella David is a Cambridge University graduate with a degree in engineering, who has extensive management experience with companies such as William Grant & Sons, Bacardi, Nationwide Building Society and others.

Mary E. Landry has a 35-year career in maritime operations, including service on the White House National Security Council and Senior Director for Resilience Policy, and active duty in the U.S. Coast Guard.

Pamela Thomas-Graham is the founder and CEO of Dandelion Chandelier LLC, a private digital media enterprise focused on global luxury, who has also worked for Credit Suisse, Angelo, Gordon & Co, and was president at Liz Claiborne and at CNBC. She began her career at McKinsey & Company, in 1989, and became the firm’s first African American female partner in 1995. She is a Doctor of Law from Harvard University.

PAPENBURG, Germany — The Norwegian Escape will be a bigger, and improved, version of the two ships that preceded it in the Norwegian fleet.

On a tour here, Norwegian executives showed off the line’s 14th ship, which is about six weeks away from its debut in Miami in early November.

Although it is based on the same platform as Norwegian Breakaway and Getaway, the Escape will be notably different in its details and carry more passengers.

Escape, designated Breakaway Plus in early discussions, will have one more deck of cabins, giving it a capacity of 4,270 at double occupancy, up from 3,969 for its predecessors.

The extra deck also allowed for a two-story design in the deluxe Haven area, which now has an elegant glass-enclosed curving staircase connecting the two levels. The Haven also has an indoor-outdoor restaurant, a feature from Norwegian Epic that was skipped on Breakaway and Getaway but is being resurrected.

On almost every deck, Escape has something that distinguishes it as new. On the top deck, the ropes course has been expanded to three levels and has 99 elements, including five zip tracks. The Plank, a balance beam that extends out over the side of the ship, is now on either side of the ship, doubling the opportunity for passengers to try it.

The Aqua Racer water slide has been given a bigger diameter and can accommodate 1,000 riders an hour, up from less than 500 previously.

Breakaway/Getaway’s ice bar has been deep-sixed in favor of The Cellars, Norwegian’s first wine bar. Jimmy Buffet’s Margaritaville replaces the more generic Flamingo bar near the Spice H2O entertainment area, and his 5 O’Clock Somewhere bar will use the space occupied by the Fat Cats jazz and blues club on preceding ships.

At the new Food Republic, guests will order dinner on iPads. “These ships come out with ever-more innovative features with every ship we build,” said Norwegian President Andy Stuart.

Stuart said that the outdoor dining area in The Haven and the ropes course are among his favorite additions on Escape. “The ropes course is going to blow people away,” he said.