WHY IT RATES: Carnival Cruise Line performances always rock, and the new production trio will keep things fresh in the fleet.

Part of the line’s popular Playlist Productionsrevues, the new shows make maximum use of the ship’s sophisticated and interactive LED screens while showcasing the talents of the shows’ performers delivering unforgettable evenings of high-calibre entertainment.

“Carnival Horizon promises to be a spectacular addition to the fleet and we’ve made the entertainment and activity options equally spectacular with such an array of fun choices, morning until night,” said Sarah Beth Reno, Carnival’s vice president of entertainment. “Whether you’re enjoying an amazing Playlist Productions show, checking out the hilarious entertainers at the Punchliner Comedy Club or participating in our legendary deck parties, our team will make sure your Carnival Horizon vacation is one you’ll never forget,” she added.

The Playlist Productions shows on Carnival Horizon include:

—Soulbound: Hosted by Carnival Horizon’s very own “soul catcher,” this fun, high-energy show offers a gothic-inspired journey through New Orleans with stops at recognizable Crescent City landmarks like a haunted paddlewheel ship, an apothecary shop and cemetery highlighted by levitating chairs and other spookily stunning illusions. As spirits are playfully captured and brought back to life through dazzling special effects, cast members belt out R&B favourites like Superstitious, Soul Man and Born Under a Bad Sign.

—Celestial Strings: Billed as a “breathtaking performance beyond your wildest dreams,” Celestial Strings merges the beauty of classical music with modern pop beats. Taking place in an elegant and enchanted garden that seamlessly transforms from season to season, stimulating the senses with unbelievable visual imagery, 3D cast interactions and aroma-infused sets to bring the garden to life. The first Playlist Productions show to feature a live string trio, Celestial Strings is truly a multi-sensory symphony for the soul.

—Vintage Pop: Taking viewers back to the Great Gatsby and Cotton Club era with contemporary songs like “All About that Bass,” “That’s What I Like” and “Work” transformed into classic jazz interpretations, Vintage Pop features a toe-tapping six-piece live band performing in a modern-day speakeasy. Highlighted by a show-stopping burlesque number that leaves audiences breathless, Vintage Pop ends with a rollicking after-party in the atrium where guests can dance and interact with the flapper- and zoot suit-outfitted cast members.

—Amor Cubano: A Caribbean Dance Romance: This exciting get-on-your-feet show blends classic Latin songs with today’s hits and features an authentic reproduction of Carnival Horizon’s sizzling Havana Bar. The show is highlighted by a seven-piece Cuban-inspired band that performs songs by Gloria Estefan, Celia Cruz and others amid a tropical, multi-hued backdrop of Cuba and Miami, the latter of which will be the ship’s eventual year-round homeport.

The new shows complement Carnival Horizon’s vast array of entertainment offerings which include family-friendly and adults-only performances at the Punchliner Comedy Club and the family-favourite Hasbro. The Game Show, a live-action game show incorporating larger-than-life adaptations of popular Hasbro games, along with an IMAX Theatre showcasing first-run blockbusters, documentaries, and family favourites, and the multi-sensory Thrill Theater, part of the Carnival Multiplex entertainment concept, are sure to keep every family member entertained.

At night, Serenity, the ship’s outdoor adults-only retreat, is transformed into a South Beach-style club under the stars complete with spectacular lighting effects and a crowd-pleasing mix of popular music spun by one of Carnival’s professional DJ’s. Live bands along the promenade, solo artists in the new Smokehouse Brewhouse BBQ restaurant and brewery and the line’s legendary deck parties will also be offered.

Carnival Horizon is set to debut April 2, 2018, with a 13-day Mediterranean cruise from Barcelona – the first of four round-trip departures from that port – then reposition to the U.S. with a 14-day trans-Atlantic crossing from Barcelona to New York May 9-23, 2018. 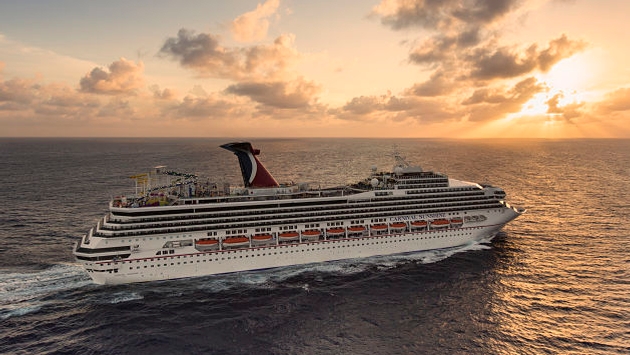 “With its convenient location and strong tourism appeal, Charleston is one of our most popular homeports and we’re delighted to build upon this success with the deployment of Carnival Sunshine,” said Christine Duffy, president of Carnival Cruise Line, in a press release.

“Carnival Sunshine not only provides guests sailing from Charleston with a newer, larger ship with so much to see and do but also underscores our commitment to our year-round operations from this port.”

“The decision by Carnival Cruise Line to homeport the Carnival Sunshine in Charleston is an important affirmation of their success and commitment to operations in Charleston,” added Jim Newsome, South Carolina Ports Authority (SCPA) president and CEO, in the release.

“SCPA’s cruise business is an important part of our maritime commerce mission and diversification of business segments. The Port succeeds through having world-class brands, such as Carnival Cruise Line, as its direct customers and looks forward to continuing this productive relationship.”

Approximately 220,000 passengers are expected to be carried onboard annually from the cruise port with each having a wide array of attractions to enjoy. The ship was dramatically converted from the Carnival Destiny in 2013 and now includes tons of dining and entertainment options ranging from the Havana Bar and Ji Ji Asian Kitchen to “Hasbro, The Game Show” and The Punchliner Comedy Club.

The ship’s new Charleston cruises will begin to set sail May 18, 2019. Four-day cruises will depart for Nassau. Five-day itineraries will head for Nassau and the private Bahamian island of Half Moon Cay.

“We’ve been working on this for at least a couple of years. We knew that Charleston market was a fabulous market. We’ve known it for a very long time, and we knew that there was plenty of demand to support a newer and larger ship. Between 2016 and 2017, we actually operated 11 different cruises on the Carnival Sunshine from Charleston and we learned so many things about improving the guest experience and making all of the logistics work well. But also what we learned was they were really really popular.”

“They were very successful. The guest satisfaction ratings were very high, and so we knew we were onto a winner. So, it was time then to go ahead and bring the Carnival Sunshine to Charleston in May of ’19 and it brings so many things to the market that we haven’t had before.”

Of course, there’s still love for the older Fantasy-class vessel too.

“The Carnival Ecstasy that’s operating there now is a great ship,” said Thornton, “and it’s doing very very well. But this will allow us to evolve in Charleston so it will bring a whole host of new features to the Charleston market: Everything from the dining which will now have a fully-functioning Fahrenheit 555 Steakhouse, Ji Ji Asian Kitchen, the BlueIguana Cantina and—a feature that people love across our fleet now—the Guy’s Burger Joint. Those are all going to be available on the Sunshine.

“It has a spectacular three-level Serenity adults-only section of the outdoor decks which people love. Families are really important to us in the Charleston market as they are across our fleet, and there’s so many things for the kids to do now: Everything from our really popular Dr. Seuss program to things we’re doing on all the outdoor decks now.

“But this has a really great water park. It has two large racing slides and the fully-functioning kids water park, and then we’ve just done a great job in terms of our children’s programming and so forth. So, it’s going to be really great for families.

“And one thing that the Carnival Ecstasy lacked that we really wanted to bring to the market were staterooms with private balconies,” continued Thornton. “We have a hundred of them on the Carnival Ecstasy, but we’re going to have over 500 of them on the Carnival Sunshine. So, it’s going to just provide that feature that people love today—you know the fact that having a private balcony is very popular today and people want to be in their stateroom with the great views of the sea while the ship’s at sea.”

Besides the regular sailings, there will also be a special 11-day Carnival Journeys cruise available onboard during December 3-14, 2019.

“It goes to these kinds of great places: St. Thomas, Aruba, Bonaire—so we’re all the way down in the really deep part of the southern Caribbean—Grand Turk and Half Moon Cay, which is our private island in the Bahamas. So, it’s just a very unique thing,” continued Thornton.

“We bring onboard a lot of the onboard programming and features that we used to do on our cruises back in time. We have the grand midnight buffet. We have the waiters with the white glove service at certain times. We call the daily program today the Fun Times. (Back in the day it was called Carnival Capers.) We’ve gone back to Carnival Capers. So, we bring back some of the features that we used to do a long time ago that our guests love and that still resonate with guests today, but it kind of has a throwback feel to it if you want to think about it that way.”