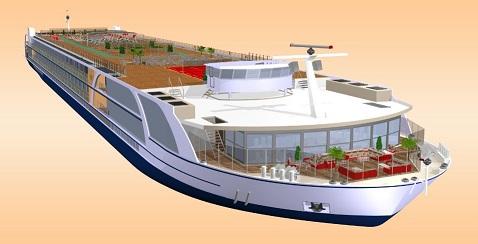 AmaWaterways is to launch the ‘biggest river cruise vessel’ in Europe in 2019.

The ship will be twice as wide as standard river cruise vessels and accommodate 194 passengers.

The ship will sail the Danube with itineraries released by the end of the month.

President Rudi Schreiner said the ship, which will be called AmaMagna, would have more facilities and ocean style cabins.

The announcement was in Amsterdam during a week-long sailing on the line’s newest ship AmaKristina which was sailing a Rhine River itinerary from Basel to Amsterdam.

AmaWaterways was set-up in 2002 by husband and wife team Rudi Schreiner and Kristin Karst and Jimmy Murpy.

The cruise line has 20 ships and is expected to launch another five by 2019. It runs cruises around the world, including Europe, Asia and Africa.

The company set-up a UK office in Guildford last year headed up by cruise industry veteran Stuart Perl. Previously, it had been represented by Fred Olsen Travel since 2008.

Ama also has a partnership with APT which has chartered its ships since 2006 for its luxury cruises.

The ship will have multiple dining options including an al fresco glass-enclosed restaurant, an open-water sports platform, with zodiac boats, canoes and recreational equipment. Construction for the new began on March 6.

Schreiner made the announcement during a Rhine sailing on the line’s newest ship AmaKristina.

“As the luxury river cruise market continues to grow, we want to carry on as the leader in industry innovation,” he said.

“While this new double-width concept has been on the table for some time, we believe, given the unique demand that exists, that now is the perfect moment to introduce this style of ship.

“AmaMagna will provide guests with generous personal space, the freedom of multiple dining choices and exceptional stateroom comfort. “Combining this with our award-winning cuisine, noteworthy shore excursions and remarkable onboard service, we feel this ship is a game-changer.”

AmaMagna will feature 97 staterooms – the majority of which will be over 300 square feet.

Disney’s “Beauty and the Beast” river cruise features a tour of Riquewihr, a French village that evokes Belle’s hometown from the movie. Photo Credit: Yoshihiro Takada

Adventures by Disney is amping up its themed river cruise experiences for 2018, adding “Beauty and the Beast” themed sailings along the Rhine River.

There will be screenings of both the live-action and animated versions of the film on the ship and a tour of Riquewihr, a French village that evokes Belle’s hometown from the movie.

Adventures by Disney is also offering two epicurean Rhine cruises during the fall. Hosted by chefs and sommeliers, these adult-only sailings will highlight food and beverage experiences both on and off the ship. Activities will include winetasting, gourmet food and wine demonstrations and workshops, culinary walking tours in several ports, a French patisserie class, local beer and wine pairings, and craft cocktail seminars.

The departures will include a new adults-only Oktoberfest sailing in September 2018, which will visit Germany during the annual Oktoberfest celebration, and will include themed parties and festive culinary offerings both on and off the ship.

The eight-day Danube cruises sail through Germany, Austria, Slovakia and Hungary. They include visiting scenes from the movie “The Sound of Music” in Salzburg, exploring Devin Castle in Bratislava, and taking a traditional Austrian folk dancing lesson in Melk.

Adventures by Disney entered the river cruise market last year when it partnered with AmaWaterways on family-focused river cruise itineraries. AmaWaterways thus has designed its newest vessels to better accommodate families, including providing sets of connecting staterooms and suites.

Adventures by Disney worked closely with AmaWaterways to reimagine shipboard spaces and activities to offer programming for kids, teens and adults.

It seems almost inevitable. The river cruise season gets underway and then either high or low water levels due to heavy rains or lack thereof cause some disruptions. And this season is no exception.

Since the start of the month, river cruise lines have been dealing with higher than normal water levels on Europe’s Rhine, Danube, Rhone and Seine rivers, which forced several river cruise lines to alter some of their itineraries.

The challenge is that there is no telling when or how severely these highs and lows will happen. But river cruise passengers should perhaps be made aware of the possibility and of the ways in which high or low water levels could impact their trip, because as we have seen year in and year out, some disruptions, however minor, almost always occur at some point in the season.

“So far, it doesn’t seem to have deterred clients from river cruising but if these dramatic rain or drought weather patterns continue with more and more sailings affected, it may start to have an impact in the future,” said Linda Dinsmore, a river and small ship specialist who runs the website The River Cruise Lady.

That said, she had clients that ran into some issues last week on the Rhine River, where they were driven further up the river to board their ship due to the higher waters, an adjustment that “was not too disruptive,” she noted.

When water levels are higher than normal, river cruise vessels can’t squeeze under the low bridges they need to bypass to complete their sailings, and when water levels are low they can’t sail through shallower waters where there isn’t enough clearance for the ships’ drafts. So, each river cruise line undertakes a variety of contingency plans when this happens, including (but not limited to) busing passengers to ports and destinations they can’t reach by ship, having them stay in a hotel for an extra night or two if the ship cannot get to them, or having passengers swap ships, which entails boarding another ship on the other side of an impassable bridge or stretch of water, a strategy Viking River Cruises employed for this most recent water rise.

While this season’s disruptions are nowhere near the mayhem caused by the historic floods in Europe two years back, they serve as a reminder that river cruising, despite all its potential and success, still has some notable vulnerabilities. And while river cruise companies have grown very accustomed to working around water-level issues, for customers the required itinerary changes can still serve as a disappointment if they weren’t made aware of the possibility in advance.“The mainstream cruise lines are getting better at handling these conditions and it’s not something that occurs too often or for too long when it does,” said Pete Larson, owner of River Cruise Guru. But, he added, “I always advise my clients about fluctuating river levels and how it could affect their cruise … Many new river cruisers come from the ocean cruise market where this isn’t something they may have experienced or thought about.”