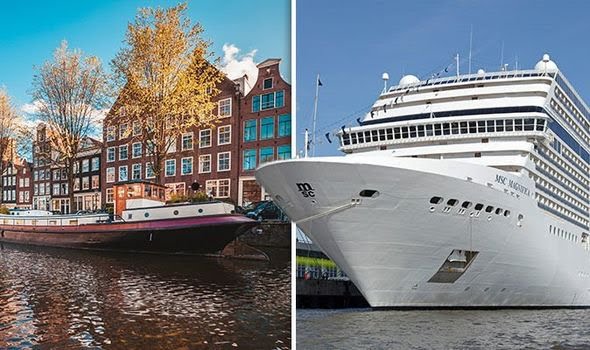 CRUISES travelling through Amsterdam have been cancelled for passengers who book holidays with MSC Cruises or Cruise and Maritime Voyages due to a new tourist tax introduced in the city.

Cruise passengers looking for a trip to Amsterdam may find themselves short for choice thanks to a new tourist tax. The city has announced a €8 head tax per day for tourists arriving by cruise, affecting passengers who stay for 24 hours or less, or €16 for those staying more than 24 hours. This has resulted in a number of cruise liners removing Amsterdam from their itineraries choosing another Dutch city instead. Thousands of passengers travelling in 2019 and 2020 could find their trips drastically altered.

Earlier this year, MSC Cruises announced they will change their overnight calls from Amsterdam to Rotterdam.

Gianluca Suprani, head of global port development and shore activities at MSC Cruises, warned Amsterdam could lose thousands of pounds of spending by the loss of passengers.

He told Seatrade Cruise: “We decided to pull our business in 2019 and as a result, Amsterdam city stands to lose between €50-100 per passenger in respect of potential spend.”

Cruise and Maritime Voyages has followed in their footsteps and announced their 2019 and 2020 port calls to Amsterdam will also now be at Rotterdam.

This means 37 of their cruises will make the move, with 30 Columbus ships and seven Magellan ships avoiding the city.

According to Seatrade Cruise, more than 50,000 passengers will be affected.

CMV CEO Christian Verhounig warned of the last minute changes for customers who will have already booked for 2019, advising 80 per cent had already been purchased.

“The local politicians have failed to acknowledge or understand that the cruise industry plans their budgets two to three years ahead and have been unwilling to look into a proper implementation schedule,” he warned.

“The late introduction of these new and un-phased charges are therefore not budgeted and simply cannot be absorbed.”

Passengers travelling with either cruise liner should check for any changes to their trips.

Costa and MSC in Majorca Port

Cruise liners are threatening to shun Majorca and Ibiza unless the Balearic government changes its mind about charging passengers two euros (£1.78) a day to stay on the islands under the new tourist tax rules.

The association of cruise companies in Europe, the Cruise Lines International Association, says the new fee is undemocratic and could force companies to leave the islands out of its routes.

And it says that unless the Balearics rescinds the decision to slap the tourist tax on all cruise passengers for the first time next year, it might take the issue to court.

The islands’ government has already come under fire for doubling the so-called eco tax for all holidaymakers in the high season of 2018, meaning guests in luxury accommodation will pay a much as four euros (£3.56) a day.

Until now, cruise ship passengers have been exempt from the fee unless they were docked for more than 12 hours.

But from summer 2018, they will pay two euros a day regardless of the duration of the stay and the Balearic government says this move alone will generate revenue of about 1.8 million euros (£1.6million).