The U.S. investigation was launched after information was provided to the U.S. Coast Guard by the British Maritime and Coastguard Agency (MCA) indicating that a newly hired engineer on the Caribbean Princess reported that a so-called “magic pipe” had been used on Aug. 23, 2013, to illegally discharge oily waste off the coast of England.

According to the Justice Dept., after the incident the whistleblower quit when the ship reached Southampton, England. The chief engineer and senior first engineer ordered a cover-up, including removal of the magic pipe and directing subordinates to lie. But the MCA shared evidence with the U.S. Coast Guard, including before and after photos of the bypass used to make the discharge and showing its disappearance. The U.S. Coast Guard conducted an examination of the cruise ship upon its arrival in New York City on Sept. 14, 2013, during which certain crew members continued to lie in accordance with orders they had received from Princess employees.

According to papers filed in court, the Caribbean Princess had been making illegal discharges through bypass equipment since 2005, one year after the ship began operations. The discharge on Aug. 26, 2013, involved approximately 4,227 gallons, 23 miles off the coast of England within the country’s Exclusive Economic Zone. At the same time as the discharge, engineers simultaneously ran clean seawater through the ship’s overboard equipment in order to create a false digital record for a legitimate discharge.

According to the Justice Dept., Caribbean Princess used multiple methods over the course of time to pollute the seas. Prior to the installation of the bypass pipe used to make the discharge off the coast of England, a different unauthorized valve was used. The valve was later found by investigators in Houston, Texas, on March 8, 2014 during an inspection of the ship.

In addition to the use of a magic pipe, the U.S. investigation uncovered two other illegal practices which were found to have taken place on the Caribbean Princess as well as four other Princess ships – Star Princess, Grand Princess, Coral Princess and Golden Princess.

One practice was to open a salt water valve when bilge waste was being processed by the oily water separator and oil content monitor in order to prevent the oil content monitor from otherwise alarming and stopping the overboard discharge. This was done routinely on the Caribbean Princess in 2012 and 2013, the Justice Dept. said. The second practice involved discharges of oily bilge water originating from the overflow of graywater tanks into the machinery space bilges. This waste was pumped back into the graywater system rather than being processed as oily bilge waste. Neither of these practices were accurately recorded in the oil record book as required by law. All of the bypassing took place through the graywater system which was discharged when the ship was more than four nautical miles from land.

“The pollution in this case was the result of more than just bad actors on one ship,” said Assistant Attorney General Cruden. “It reflects very poorly on Princess’s culture and management. This is a company that knew better and should have done better. Hopefully the outcome of this case has the potential not just to chart a new course for this company, but for other companies as well.”

In addition to the criminal information, a plea agreement and joint factual statement were filed Thursday in court in Miami. Photographs of some of the evidence provided by the whistleblower and obtained by the government were also filed in federal court.

In the factual statement, Princess admitted to the following:

“The conduct being addressed today is particularly troubling because the Carnival family of companies has a documented history of environmental violations, including in the Southern District of Florida,” said U.S. Attorney Ferrer.  “Our hope is that all companies abide by regulations that are in place to protect our natural resources and prevent environmental harm.  Today’s case should send a powerful message to other companies that the U.S. government will continue to enforce a zero tolerance policy for deliberate ocean dumping that endangers the countless animals, marine life and humans who rely on clean water to survive.” 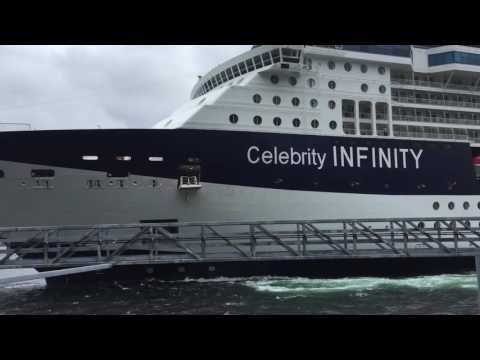 Celebrity Infinity crashes into the pier

The Celebrity Cruises cruise ship Celebrity Infinity ran into a little bit of trouble pulling up to a pier in Ketchikan, Alaska on Friday afternoon.

Video of the incident posted online shows the ship approaching the #3 berth at the Ketchikan cruise ship dock before crashing into the pier almost in slow motion, but hard enough to cause visual damage to the ship and what looks like major damage to the pier.

Weather on scene was reported to be gusting at 45-miles per hour when the incident occurred.

The U.S. Coast Guard said it was alerted to the accident on Friday afternoon by the ship’s pilot. No injuries or pollution have been reported.

“The Coast Guard is grateful no one was injured as a result of this accident,” said Lt. Dianna Robinson, command duty officer at Sector Juneau.  “Our personnel are working to determine the cause of this accident and will work with local partners to ensure the continued safety of those using the cruise ship docks.”

A cruise ship crashed into a wall in a lock on the St. Lawrence Seaway in upstate New York Thursday night, injuring 30 people on the ship and blowing a hole in its bow, according to authorities.

The U.S. Coast Guard says the 286-foot Saint Laurent was headed from Montreal to Toronto when it hit a wall in the Eisenhower Lock in Massena, New York, near the Canadian border, around 9:45 p.m. Thursday. There were 273 passengers and crew aboard, most of them French or Swiss nationals, the Associated Press reports.

“When the ship hit the lock, it suffered a hole in its bow and water started coming in,” Coast Guard spokeswoman Lauren Laughlin told The Huffington Post.

Lock workers lowered the level of the water below the hole, Laughlin went on, so “the ship is still floating but it’s not flooding.”

Rescue workers took 30 injured passengers and crew off the ship, according to Laughlin. Twenty-eight of them were treated for their injuries and returned to the ship. Two people are still being treated for serious injuries.

Marine inspectors and salvage inspectors are currently aboard the ship assessing the damage and working out a salvage plan. Because the ship and the lock are on different levels, passengers can’t just walk off the ship, Laughlin said. They may have to clamber down ladders to escape, or be lifted off by cranes.

Laughlin said the passengers trapped on the ship are probably comfortable where they are. “They have all the amenities, they have food, they have water, they have air conditioning,” she said. “The power is on, they’re just not driving.”

In a statement early Friday morning, the Saint Lawrence Seaway Development Corporation, the U.S. government-owned corporation that manages the lock, said that “the ship is stable and no pollution is reported.” According to the SLSDC, the ship is holding up seven commercial vessels waiting to pass through the lock.

The Saint Laurent is owned by International Shipping Partners, and the crash remains under investigation.