Photo of the Navigator of the Seas leaving Southampton, by Dave Jones

PANIC engulfed a cruise liner when staff wearing life jackets rushed to deal with a flood after the ship began taking on the water in the Atlantic Ocean.

Passengers onboard the Navigator of the Seas vessel, part of the Royal Caribbean International company, described hearing a “loud bang” at about 3am on Sunday before the ship began to take on water.

A crew member onboard said a “Bravo code” was used, which many cruise lines use to alert the crew to a fire or other serious incident on board without alarming passengers.

“One of the stabilisers on the Navigator of the Seas broke and made a hole at the hull, they had to close an entire fire zone because it was leaking water like crazy.

“They sounded the alarm and there was crew walking around with life jackets.”

The ship, which had set sail from Southampton on October 26 for a 10-night tour to the Canary Islands, was forced to make an emergency stop at the nearest port.

Crew members had managed to make a temporary repair until it arrived at the port of Vigo, north-west Spain.

Passenger Paul Edwards from Worcestershire said: “We were experiencing rough sea last night, and then in the early hours last night we heard a bang.

“We were told there was a minor technical fault with the stabilisers and we had to dock in the Port of Vigo, Spain for 24 hours while they fixed it. 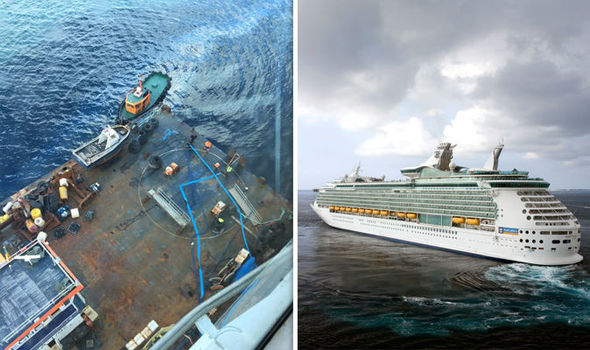 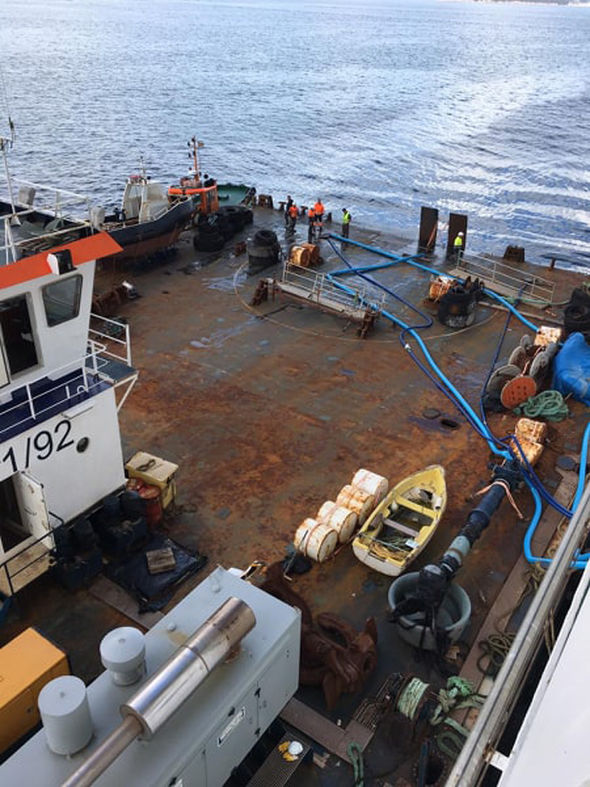 Crews pump water out of the Navigator of the Seas (Image: Paul Edwards)

“But, it was a major problem and we were on a ship hundreds of miles from land taking on water.

“But what I am really angry about is that they are trying to keep it hush, hush.”

The vessel was due to arrive in Vigo on November 3 as a final port of call before heading back to the UK.

Guests onboard were told the Captain is due to make an announcement about the rest of the scheduled cruise.

Guests onboard were told the Captain is due to make an announcement about the rest of the scheduled (Image: GETTY)

The ship is still docked in Vigo with passengers offered only a 25 per cent of their fare to spend on board the ship and 25 per cent off any future fare with the company as compensation.

Some fear they could be charged for extra days, with passenger Tina blasting on Twitter: “Currently on Navigator of the Seas, can totally appreciate the ‘technical problems’ but this change of itinerary is a joke!

“Just seems like a money maker for Royal Caribbean to me with the extra days at sea. 25 per cent onboard credit?!”

Mr Edwards added: “It feels like being in prison. Can’t do anything, can’t go anywhere.”

Royal Caribbean said in a statement: “Navigator of the Seas is making repairs to resolve a technical issue. The ship is fully operational with no impact on its manoeuvrability or the safety of our guests and crew. However, because of time needed to make the repair, it was necessary to modify her current itinerary.

Under near perfect conditions in Vigo, Spain, the first Ritz-Carlton Yacht Collection vessel was floated out in a ceremony at the Barreras Shipyard. 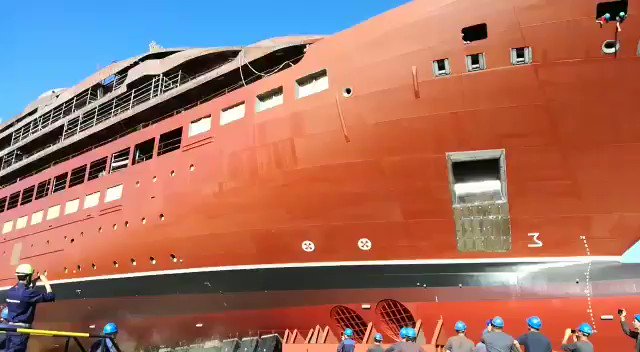 Company executives, VIPs, media and press and other key parties were on hand to witness the historical moment as the 298-guest ship touched the water for the first time. Now, the ship moves to an outfitting pier ahead of its launch into service in early 2020.

Oasis of the Seas in Southampton

Oasis of the Seas has now finished having her refit and finally came into the port of Southampton earlier today. It was a big deal to have the world’s largest cruise ship (joint with her sister Allure) stop off at the UK’s port. Many visitors made their way to Southampton just to get a glimpse of just how larger Oasis is.

If you were not lucky enough to see Oasis of the Seas in Southampton, there are pictures over on the Daily Echo, as well as a video of her entering the port below. This was such a big occasion and so we had tug boats spraying water, as well as helicopters circling her as she manoeuvred into City Cruise Terminal.

Oasis of the Seas video 1

This is the first time that Oasis of the Seas has visited the UK, and so took a lot of skill to get such a large ship into port, although the experience of the Captain and pilots made certain everything went smoothly.

Many cruise lovers made the trip down to Southampton in order to see just how magnificent this giant of a cruise ship is.

She is due to set sail again later tonight, once the more than 6,000 passengers have boarded. Once she leaves port, the destination will be Fort Lauderale, Florida, calling at Vigo, Spain along the way.

Oasis of the Seas Video 2