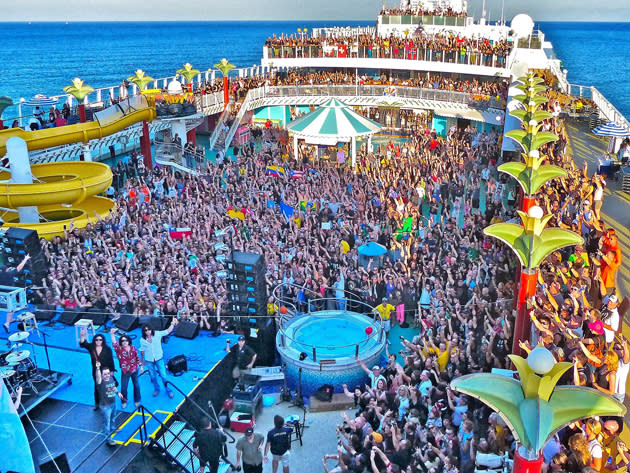 Fans of blues and rock can head out to sea in 2018, simultaneously getting their musical groove and vacation on aboard three new themed cruises.

Cruise to the Edge 2018 will be aboard Royal Caribbean International’s Brilliance of the Seas for five nights from February 3-8. Prog-rock’s biggest festival at sea will be hosted by YES as it sails from Tampa, Florida to Belize City, Belize and Costa Maya, Mexico prior to returning.

Experiences onboard will include artist/cruiser photo experiences, Q&A sessions, theme nights and more. One main event will be CTTE Late Night Live with the opportunity to potentially jam with a headliner, watch fans and artists performing together, see a guest showcase or have your song selection played.

The Brilliance of the Seas beckons guests with a nine-deck atrium, glass-enclosed elevators, Solarium pool, Vitality Spa, rock-climbing wall and plenty of other venues and Prog Performances stages.

The four-day voyage will naturally showcase Bonamassa and others as the ship departs roundtrip from Miami, Florida to Montego Bay, Jamaica.

More are expected to be announced.

The Norwegian Jade will be newly refurbished by the time the music festival kicks off with musical group collaborations, a Black Country Communion reunion, artist activities and lots of live performances. The ship itself will feature new restaurants, bars, lounges and updated interior design.

The Monsters of Rock Cruise 2018 is scheduled for five nights aboard Royal Caribbean International’s Navigator of the Seas roundtrip from Miami, Florida to Falmouth, Jamaica and Labadee on February 11-16. The hard rock/heavy metal festival will additionally feature two pre-cruise parties.

Hosting the cruise and moderating Q&As and other events will be Eddie Trunk and comedian Don Jamieson (VH1’s “That Metal Show”), as well as radio host Nikki Blakk and Luc Carl (SiriusXM’s “Hair Nation”).

Additional activities will extend to artist photo-ops, Gong Show Karaoke, My Bloody Valentine Fantasy Ball, “So You Think You Can Shred” and Cooking with Rock Stars hosted by Lisa Tirone and more.

As a Voyager-class ship, Navigator of the Seas showcases the Royal Promenade and attractions such as a FlowRider surf simulator.